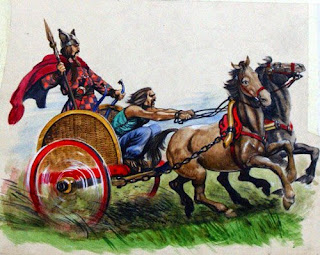 We have 15 days left to this contest. The Celtic theme, which seemed so popular in the poll, has apparently stymied the creativity of many of you, so I have loosened the restrictions and opened the contest up for any short, TSR era D&D edition Compatible adventures. Now adherence to the Celtic theme will grant bonus points for an entry, but is not required.

I am a little concerned that I have only received one entry thus far, but since there have been a myriad of questions concerning the contest, I remain hopeful that we will meet some minimum threshold for this to be considered an actual contest.

I have been told that we should avoid sending out physical prizes as long as the plague still stalks the land, so I will instead give DrivethruRPG gift certificates. I am thinking the prizes will be proportional to the number of entries received, the more entries, the greater the value of the prizes, and the number of prizes as well.

I don't think it makes sense to give more than a single prize for fewer than ten entries, and I don't think a single entry even constitutes an actual contest. So I am thinking a single small prize when we reach five contest entries.

I have heard from a few of you out there that you would write something for this contest, but you've never written an adventure before, or you've never written anything for other people to read. My advice is be bold, everyone starts somewhere, and most of us have this kind of anxiety over whether or not it's going to be “good enough”. The worst thing that happens is you fail, however you define failure, and failure is a great teacher.

Anyway, good luck, and I hope that you all receive some inspiration to write and adventure for the contest.