Posted by The Great Khan at 10:06 AM 0 comments Links to this post

Changed my Blog Title Back

Returned to Ramblings as it were.

I have written my own more S&W version of Star Trek, it's not polished and ready for public consumption, but it's more or less playable and I hope to test it soon.

Created a mission based Vietnam War RPG D&D hack. This is another one that needs polishing, but it is playable (provided I am at the table to explain the bits I haven't written yet).

Tossed out both my OA D&D hack and my B/X WW II projects, and started over with some of the design principles I came up with for both 'Nam and Star Trek. Got a complete outline and extensive notes for my OA D&D hack (tentatively titled "Samurai!") and planned a supplement ("Ninja!").  I even figured out what I am doing for art for "Samurai!".

Created a new campaign world for OD&D/S&W Whitebox, as it turns out the implied setting of OD&D is different than it is for AD&D. Both have an implied post-apocalyptic setting, but OD&D is a lot more free and easy with sci-fi elements than AD&D. I actually ran a game in my new campaign setting earlier this month and, while it's reception was mixed, it went OK. I was a little disappointed that the party wasn't terribly interested in the travel brochures from the 4th Reich, and that they decided to kill their tour guide in Helltown, but I have some easy fixes planned for this coming Saturday.

Oh, and I created a new game system entirely, I call it "Simple d20 Mechanics for RPGs or Miniature Battles, including rules for Magic". This one is being looked over by my buddy Darryl in case it needs some rules clarifications or whatnot, he became a professional editor after he and I worked on Paul Elliot's 43 AD. I hope to release it soon as a free download from our newly created collaboration "Great Khan Games" once it's ready I'll provide the RPGNow link.

I have a couple of more ideas in the "brainstorm" phase of development too.

Of course, the trade off here is that I haven't written any of my promised reviews, despite the fact that I acquired even more stuff to review. I recently bought several new OSR products on Lulu, first up will be Full Metal Platemail, but I have been writing more than I've been reading for the last few weeks.

Also- is anyone interested in writing some extensive random tables that are reminiscent of the AD&D OA ancestry tables? I am apparently bad at that and it's costing me a lot of time. Just a thought.

Posted by The Great Khan at 9:43 AM 0 comments Links to this post

Just boosting the signal, although, according to my stats, I should add Great Helm and Crusader Helm if I really want lots of hits. That said "Chinmail Bikini Babes & Hot Elf Chicks" sounds like it could be an RPG all on it's own. I think it would even fly with my group of mostly female players. It's tag line could be something like "The all fantasy female stereotype RPG". Here is a classic Chainmail Bikini Babe, just so you all don't feel cheated- 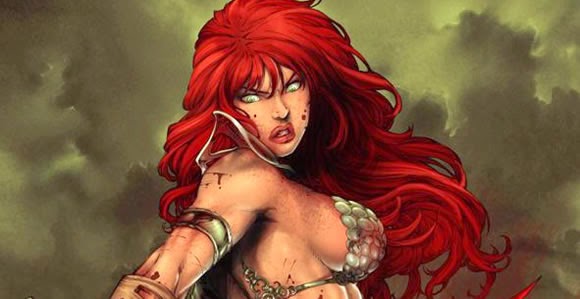 I always liked Red Sonja. When I was a kid, reading Marvel Comics, Red Sonja was just a Female Conan the Barbarian to me, I never understood that she was a negative female stereotype just because she wore the skimpy armor, anymore than I thought Conan might be a negative male stereotype just because he runs around in a loincloth. I guess I just thought that, as comic book characters, they needed to have a unique look to make them stand out from the rest of the characters, and that it might be pretty warm in Hyboria.

And a Hot Elf Chick- 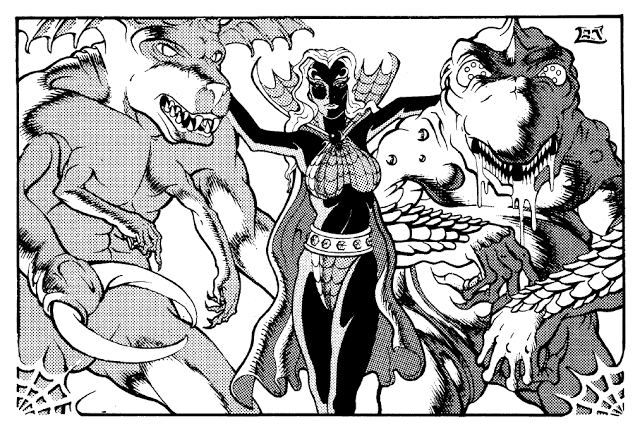 OK, she's a Demoness, but in Elf form.

I was going to post some more mini-reviews here, but I am not feeling it right now. So have a couple of Great Helms (as used by Crusaders) as consolation. 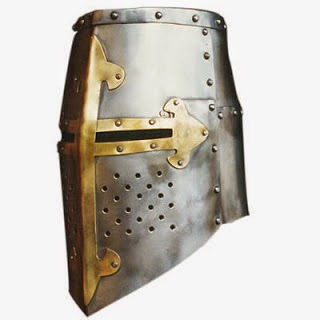 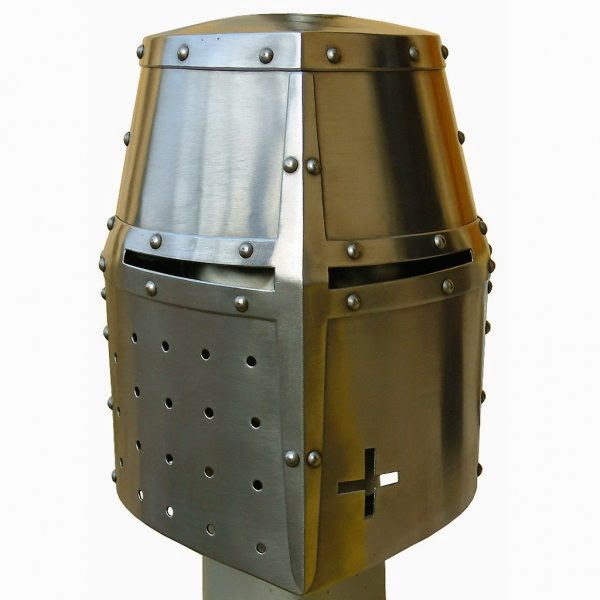 A random thought just struck me, has anyone considered that "Lolth" might just be a Gygaxian corruption of "Lilith"? Is this a new thought? Has everyone figured that bit of linguistic evolution out before me?

Posted by The Great Khan at 10:12 AM 0 comments Links to this post

OK, I've had some time to look at WotC's latest iteration of D&D now, and I have to say that my reaction is mixed. Not just on the aesthetics either.

The Player's Handbook- I think I have made my opinion on the art in the Player's Handbook pretty clear, not a fan. However, the rest of the book, and I am willing to let the art slide if I like the content, still left me with an over all negative opinion. I mean, I realize this is the Player's Handbook, but 170 pages on character generation? Really? OK, that covers advancement too, but in the 1st edition AD&D Players Handbook it's a mere 38 pages, which is far in excess of B/X's 14 pages in the Basic book. I found myself skimming in a lot of places and had to force myself to slow down, go back and reread sections. That was tedious. Sure, I could just pick a "standard" Dwarven Fighter instead of reading through all the class/race choices (which would save me roughly 110 pages of reading), but then there's a bunch of fiddly stuff (that I will likely forget about as a player, not to mention trying to remember all of it as a DM) before I even get to buying my starting equipment. Now, my caveat here is that I have not played yet, so maybe it will all go easier than I think. My personal bias is also irked by the fact that the tallest Humans are now only 6'4", according to the random table. I am 6'6" and I am not the tallest Human I have ever met. Overall grade D.

The Monster Manual- Not a huge fan of the art there either, but it is an improvement over the Player's Handbook. There is a design aesthetic at work here that seems too homogeneously stylized, but this isn't really new to this edition; just, disappointingly, continued. The stat blocks, ranging from roughly 1/4 to 1/2 page are too much, in my opinion. B/X D&D gave us about 6 monsters to the page, here we might get 2. It's pretty hard to screw up a Monster Manual too bad though, so overall grade C.

The Dungeon Master's Guide- Probably the saving grace of the core books of this edition, the art still didn't appeal to me, but damn, it's a meaty tome. Chock full of real advice that is practically system neutral, I'd have to say it's the best effort on a DMG since 1st edition AD&D- and I loved that one. The overall greatness is diminished by a couple of the things that I find to be anathema to DMing- Tailoring your encounters to your party, and it's ugly cousin; tailoring treasure yields to the party. They are small parts of the book, but they remind me too much of 3e and the reason I quit D&D. They mar an otherwise awesome book, but they are core to the build of the system, as they were in 3e (and, presumably, 4e). Anyway, it's a pretty darned solid book for any GM, but it's weak art and a few later editionisms that were kept drag it's grade down, a solid B.

Other random thoughts-
Backgrounds: I actually thought I would like them, I like the concept, but they left me cold when I read through them. Power Level: Easily as amped up as 3e.

Races: Their proliferation irritates me, but at least it's the DM's explicit say as to whether or not any given race is allowed.

Art: yep, I know, I keep harping on the art. I think they would have done better with LESS art direction. Give an artist a general description of what you are looking for, and let them do it, maybe you take it maybe you don't, but I think that this edition could really have benefited from having different art styles represented. I think too that this edition has taken itself too seriously and has produced a lot of self conscious mediocre art as a result. My wife is an artist, so I have grown, over the years, to appreciate how much of an impact the art has on the product. Early editions mixed it up
with a bunch of different artists, with wildly different styles and levels of talent. Sutherland, Roslof, Dee, Willingham, Otus, Darlene and Trampier (just off the top of my head, and I apologize to the artists I missed and their fans) put their stamp on Gary and Dave's game. Just looking at the illustrations in the Holmes Basic, B/X and AD&D books made me begin to imagine, and still does today. This edition just doesn't. I think it was the love for the game, and the use of their own imaginations that made the early D&D artists so good, they pored their souls into the work. Art is subjective, but I think that these- 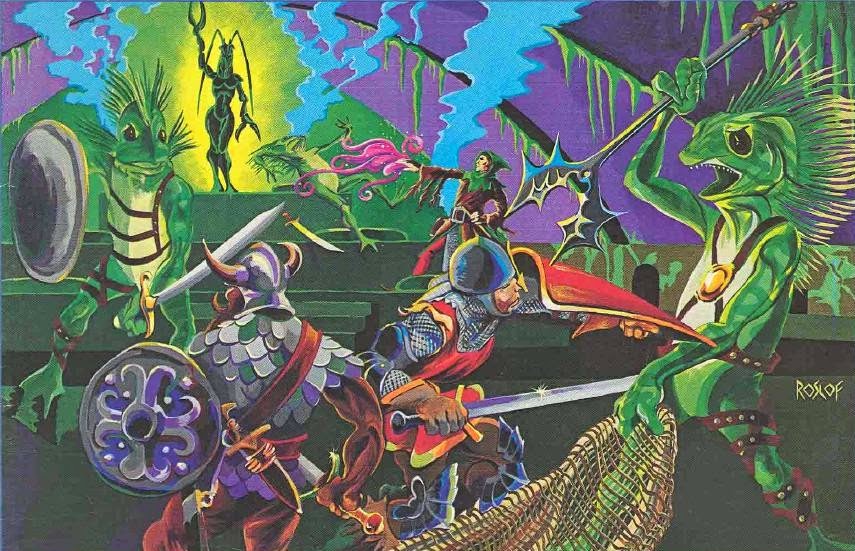 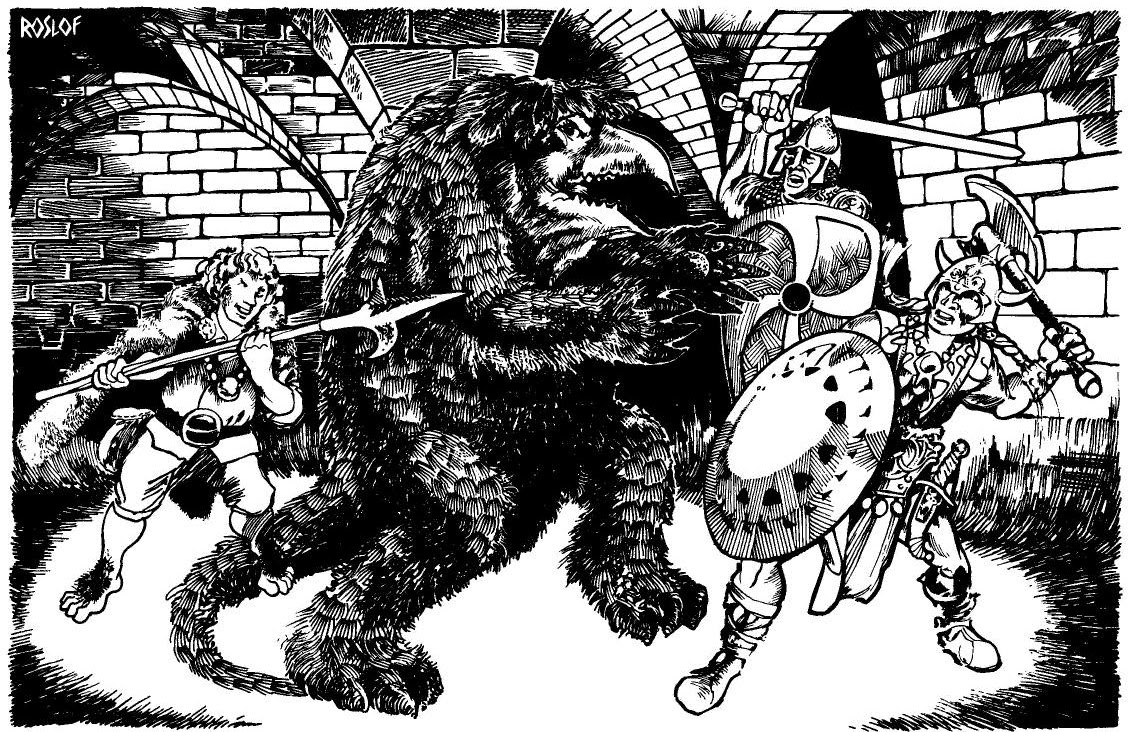 are more evocative than this- 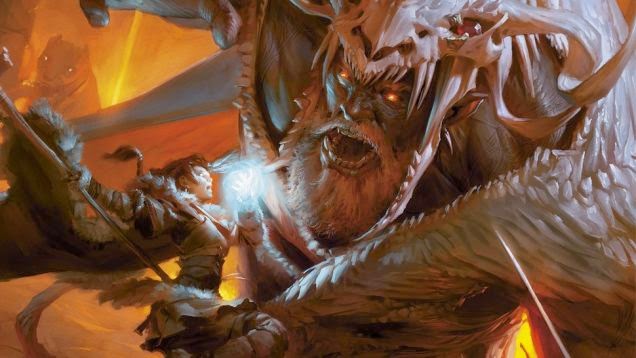 So I guess that gives 5th edition D&D a solid C average. My opinion of it may change with play, and again with DMing.

Posted by The Great Khan at 9:29 AM 0 comments Links to this post