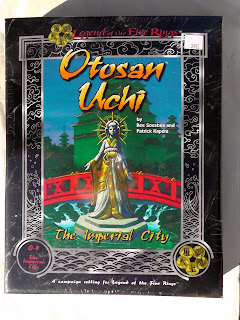 I discovered that, with the purchase of the "Otosan Uchi" boxed set, I had nearly everything printed for the first, second and third editions of the "Legend of the Five Rings" RPG. Everything except the "Tomb of Iuchiban". Imagine my surprise when I went looking for that particular item and saw the prices that it fetches. I am not a collector, I play my games, but when I see a $120.00+ price tag on what has been called "the Tomb of Horrors for L5R", I get a little annoyed. What, did they only print like 50 copies? I'll stop ranting now.

Last weekend I played "Barbarians of Lemuria" and it was pretty cool, met some cool new people and they seem like my kind of playing group, a little laid back, the GM made rulings instead of looking stuff up in the book every 5 minutes. I even had a beer there. Plans have been laid out to make this their summer game and I intend to keep playing. It was fun, my only comment was that we could have played the exact same adventure with D&D or a retro-clone (my current favorite being S&W). 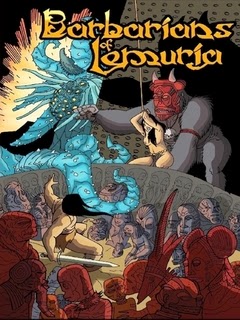 Now I see it's June and I have an obligation to run my contest, the sole prize for this is a box of Warlord Games 28mm scale American Infantry for their Bolt Action line. I haven't played Bolt Action yet, but I did order the rules recently, because I like skirmish scale WW2 stuff. Warlord games sponsored this contest, and usually I like to pick a best adventure, with my judges, to decide who get's the prizes; but I haven't been all that bloggy lately, didn't come up with a working set of OSR style rules for WW2 (yet), so I will choose the victor at random from the comments section.My original idea had been to run an OSR D-Day/Battle for Normandy adventure contest.

For those of you still waiting on prizes from my last Roman themed contest, my wife is busy with other art commitments, but assures me that your portraits are next on her list, in the meantime I am going to just mail the dice to the winners, sorry about the delay.

Posted by The Great Khan at 12:50 AM 2 comments Links to this post