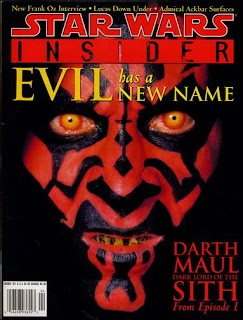 I watched The Phantom Menace (TPM) earlier today. My thinking was that it's 20 years old now and maybe I should look at it with fresh perspective, which was going to be hard, just because of my history with that film.

Remember the build up to TPM? In 1999 I was working as a substitute teacher at Mexico High School (Mexico, NY), and I remember it pretty well. I used to bring stuff with me to read, because they had block scheduling then (80 minute periods) and I always had a free period, plus lunch to kill time in. One of the things I brought with me was a copy of Star Wars Insider, Mona used to buy them for me when she spotted them in the wild, and, since the movie was maybe six weeks from release at the time, everyone, teachers, students, and administrative staff, all commented. America was on fire for a new Star Wars movie.

I remember going to see it with Mona, maybe on opening day, I don't exactly recall, but certainly in the first week; then seeing it a day or so later with my dad. I may have seen it a time or two more in the theater, I am not sure. Mona and I talked about it a bunch, both of us were sure it was a good movie, that we actually did like it, or that maybe we missed something, somehow. I got the movie on VHS and DVD as soon as they were available, although the VHS copy was a gift and only got watched once maybe.

The internet turned into a cesspool of hatred for the movie, and I started to agree with a lot of the criticisms of the film. I hated the whole midichlorian thing, I was annoyed by Jar Jar Binks and I thought Jake Lloyd's acting was terrible. The story itself was convoluted and boring, trade disputes? Really? I cringed at the racist caricatures. George Lucas had done the impossible, he made a Star Wars movie that sucked, although the Holiday Special and the Ewoks movies really should have showed us it was possible.

Even with the crap in them though, there were still some cool scenes in each act of the film. Darth Maul was pretty cool, and his music was awesome. The action scenes were, by and large, pretty decent. I watched the DVD with commentary on so I could see what they were thinking, and it did give me a greater appreciation for their craft, and I could see what they were aiming for.

I dutifully watched TPM before each of the other two prequel films, but I never liked it. I sought out and watched The Phantom Edit, which did make it a better film, and invented the concept of fan edits. I got buried under a mountain of TPM related merchandise, most of which was garbage, just because my mom and Mona's mom both knew I was a huge Star Wars fan, and it was so over merchandised, it all got marked down to next to nothing for the next few years. I think George really expected Jar Jar to be a breakout character, his stupid face was everywhere.

Fast forward to today. I had not watched that movie in maybe a decade, maybe more. Honestly the last time I recall watching it was to show my kids all the Star Wars movies before we took them to see Revenge of the Sith. We're 20 years out from it's release and I keep hearing that people are loving the prequels now, so I figure it's time to give it a rewatch.

My impressions are now that it is less tedious to watch. Dialogue is pretty bad, most of the old complaints are still there, but less now. I figure it's because I knew what to expect going in, setting expectations low made it easier to watch. I cut the actors some more slack than I did in the past, because I have heard what a nightmare it is to be directed by George Lucas, and the dialogue, like I said before, is pretty bad. The biggest new thing that struck me is the CGI, it both held up well in some cases and kind of sucked in others. The CGI droids look pretty good to this day, mostly any mechanical stuff does; the biological stuff though is dreadful. All the fish things in the planet core transit sequence for instance look like crap, the Gungans all look like crap too, even Jabba the Hutt and Yoda pretty well suck. I didn't hate the pacing, the fight scenes were generally good, although I still think that the Jedi/Maul scenes look too choreographed, but maybe that's just me. I thought about it as I was watching them.

I guess, in closing, I'd say that a reviewing of it after two decades, along with the careful consideration of everything I've learned about the film and it's makers and the actors has made me reconsider my overall grade for it. I'd give it a C- these days, which is up an entire letter grade from where I'd've placed it 15 years ago, but down from where I figured it must be back in 1999 after my initial few viewings.

I have been in something of a Star Wars place for a couple of weeks now, thinking about watching the original trilogy and trying to bring back that spark of love I had when I was a kid. I kind of want to play a Star Wars RPG too, or maybe GM one.