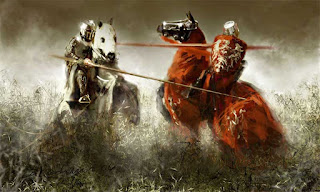 I am currently running a Roman themed AD&D (1st edition, heavy on the house rules) game on Roll20. I am giving serious thought to also running an OD&D (or Swords & Wizardry Whitebox) game there too. I am thinking of giving it a Norman/Crusader theme, kind of roll out with extra medievalisms, like jousting, maybe eliminate non-human characters so everything “other” is special and supernatural. Write up a bit of a culture packet, like I did with the Romans and see how that goes. I don't even know if I'll add Thieves.

The real kicker is that I think I might do it as a megadungeon campaign. My Roman themed “Lost Atlantis” campaign was decided, by player vote, to be a hex crawl and I'd kind of like to run some dungeon delving too.

I think I'd like to run jousting tournaments and stuff too. Maybe I'll have players make their characters like in Mike Davison's Flailsnails Jousting Tourney book.

I guess the point here is that I have a lot of time on my hands these days, since Mona died, and I'd like to fill it with some gaming. Pick either game, or both.

Keep in mind that I am a "theater of the mind" guy, so I rarely use minis in person on a real tabletop, I have yet to even try on Roll20.