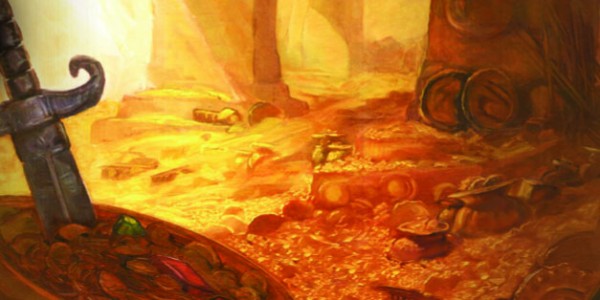 I have a couple of different campaign worlds I am working on right now. One of them is my 30+ year old world that I have worked on and run games in since I was in junior high- my Garnia campaign. I have worked on it with my BFF Darryl since the early 1980s. We have both run games there. We have both contributed significantly to the canon. Originally I was the idea guy and he was the cartographer, but that fell by the wayside almost immediately when I outsourced several lengthy eras of history to him so we could have back story; which, as I recall, was a bit of advice from an old article in The Dragon. We're older and better at writing now, both of us have taken a lot of college level history. I was a history major with a minor in medieval and renaissance studies. I forget what he did as an undergrad, but I know he was working on a masters in US history at one point. So I have tons of material, mostly in my brain, but a lot of it written out, that I could share. Garnia started out as a pretty generic D&D (AD&D) world, and it still is, but it has a lot of historical baggage added on too. So it makes me feel a little constrained when it comes to creating for it, and I am not sure that a lot of it would translate well to other campaign settings, as it is a heavily Celtic influence world (with a few other cultures thrown in around the world for diversity).

Then I have my new “Shattered Empire” setting that I started writing last December or maybe January. I started writing that world as a more D&D-ish setting for my (then) new Swords & Wizardry campaign. The campaign kind of went on hiatus while my wife was in the hospital and getting radiation, then we moved across the state, so I don't actually have a play group anymore. But I kept right on writing stuff up for it, I was inspired and it's all new and shiny to me. I started writing it up for Swords & Wizardry Complete, used Delving Deeper as another sourcebook for inspiration and played one session of Labyrinth Lord there, so I am pretty sure it works for any OSR game, or the original D&D (or AD&D) game. This was the elevator pitch emailed to my players-

“My primary working thesis is that I want this to feel like 1970’s D&D, something I was only there for the tail end of. So I jumped in and did some research on 0e and it’s retroclones Swords & Wizardry and Delving Deeper.

What I came out of that with was that 0e was just as much about science fantasy as it was about swords and sorcery, there are Androids, Cyborgs and Robots on the monster lists. Gygax, Arneson and crew didn’t limit themselves to just standard fantasy fare. “Expedition to the Barrier Peaks” was not a fluke, it was fairly standard for the game at the time. So too was the almost forgotten art of the (mostly randomly designed) mega-dungeon.

There is a strong “Arthurian” vibe to the overland encounters. Randomly you will almost certainly be challenged to a joust by some knight or other noble, just to prove yourself. There is an entire separate rules section covering jousting, something pretty much lacking from later editions.
Robert E. Howard’s “Conan the Barbarian” was a much larger influence than Tolkien’s “Lord of the Rings”; all Gygax seems to have lifted from Tolkien’s work were the Hobbits, Ring-Wraiths and Ents. Honestly, pulp fantasy and sci-fi elements are practically exuded from the games metaphorical pores.
Early D&D was set in a post-apocalyptic world, not necessarily post-nuclear holocaust (although it could be), but like a fantasy version of Europe in the period immediately after the fall of the Western Roman empire.

In retrospect, my own style of DMing tends to amplify the weird, post-apocalyptic tone of early D&D.
So I started working on a campaign world that would reflect these ideas and I first came up with the city of Dusk, then Helltown. Here, in this setting, you will find Sir Thomas Mallory, Robert E. Howard, H.P. Lovecraft, an abundance of pulp era science fiction and a curious bit of actual history. Feudal lords and noble knights abound in the rural areas, evil priests and sorcerers scheme everywhere, the cities are invariably decadent and corrupt, noble savages batter the ramparts of civilization, but so too do armies of Undead, and the lands between the civilized areas are untamed, howling, primeval wilderness filled with nature spirits, savages, monstrous creatures and demonic hordes. “

Would you play a game in this setting?

Anyway, it's been a lot of fun to write stuff for, and I think that stuff I wrote for this setting would need not too much tweaking to fit most people's campaigns. So the only thing stopping me from starting my new blog now is lack of a cool name. I am wracking my brain to find something that says something that reflect both my personality and the flavor I am going for. No more ramblings; concise, content oriented, OSR.