Following the latest TPK I am advancing the date a bit to match our own season, the new party will begin at Guido's Fort on the Donau river on November 13th 1018 AD. So what happened since the end of June, when I gave you the last update?

In late June Crown Prince Karloman died of a fever before being released from his captivity, despite the best efforts of the greatest healer-priests from Ostschild.

At the end of July there were two major battles of note. The battle of the river Bug, where Duke Boleslaw's Polish army defeated the Kievan army of Yaroslav the wise. Yaroslav abandoned Kiev and retreated to Novgorod.

The second battle has more far reaching consequences, the Imperial forces fighting against the rebellious Dirik III, Count of Holland, were decisively defeated at the battle of Vlaardingen, and Prince Clovis was killed in the fighting. The whereabouts and disposition of his bastard brother Adalbert are unknown at this time.

This leaves Princess Hildegarde as the sole legitimate heir to the throne, and she is being recalled from Wallachia, with her husband Count Vlad.

Bands of Heathen Northmen have been traversing the wild areas of the kingdom, raiding outlying settlements and pillaging trade caravans. Thus far no military force has been able to bring them to a pitched battle. Rumors abound that they are here at the behest of Heathen Wends of the kingdom, so a commission of inquisition has been created for the kingdom to hunt down and root out these pagan hold outs among the Wendish subjects in the realm.

Poor harvest due to early frosts and freak weather have further strained an already stretched thin peasantry, who were forced earlier this year to pay an extra tax for the ransom of Prince Karloman from the Poles. Some peasants, mostly returning conscripts, have turned to banditry, preying on their fellow peasants and unwary merchants.

A cholera outbreak earlier this year was largely confined to the area in and around the city of Vecht, the city fathers and the priesthood both agree witches, possibly with Jewish allies, are to blame.

The Knights of the Lance are planning an enormous expedition down the Golden Way, to bring the fight to the Elf-King's doorstep.

Hags were seen flying over the King's palace in Lenz on the night of the full moon three months in a row, these deaths in the royal family can only be a result of their curse.

Man sized rats are seen prowling the streets of Lenz in the moonlight, people fear to leave their homes at night.

A tower appeared by the old north road one day.

Heinrich von Bayern has not been seen in the daylight in months, he's changed all meetings and business of the order of Charlemagne to adjust to his new sunless schedule.

Email ThisBlogThis!Share to TwitterShare to FacebookShare to Pinterest
Labels: Ostschild 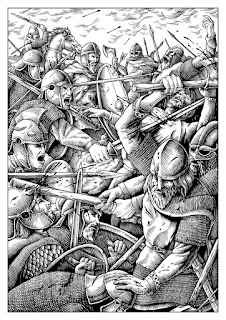 It kind of looked like I was back for regular blogging for a while and then petered out. That was unintentional, I got pretty sick and I am still dealing with the aftermath of that. I am still not back to 100%, but I have been DMing the setting still (with two missed sessions due to my illness). We play weekly at my house and I started a second game at my daughter's place, but that one has petered out because of her work schedule and a couple of other issues.

Tuesday evening we played our 17th session, one player couldn't make it because of a work thing, but we were in a good place to leave his character out safe. The party decided it was a good time to return to civilization and cash in so they could try to level up (the party Cleric did, the others were close). On their way back to the dungeon (in the wilderness, beneath an ancient ruined heathen temple) they got a random encounter with 20 Berserkers and I TPKed them. My dice were hot (I roll them in the open as much as possible), theirs were not. Three PCs (levels 3-5), two Henchmen (both level 2) and a pair of Hirelings (0-level Muleteers, brothers in fact) died in the wilderness that day.

I didn't fudge anything (except the fact that the Berserkers should have had surprise, which the players didn't see, but I thought "Oh my god, if I give 20 Berserkers a surprise round at this range, it could be a TPK", so I didn't) during the combat. I thought when I rolled up how many Berserkers there were that it would be a tough encounter, but Berserkers aren't that tough, they hit pretty hard, but go down pretty easy, and the worst AC in the party was 2 I think (except for the muleteers). I figured the party would get bloodied, and maybe have to worry about the next possible encounter (or turn back to civilization to rest and heal).

They immediately started rolling new characters, which made me happy. There was no question of ending this campaign to maybe play something else. Nobody was crying about it being too tough (except maybe me). The players were cool with it.

We have had PC death before. I TPKed them in the caves of Chaos back in June, the second session we played. We've lost Henchmen and Hirelings before (despite playing B/X, I use the more familiar [to me at least] AD&D definitions for the party's retainers, B/X is pretty foggy on the exact definitions there). PC death has become rare though, in part due to the Schrodinger's Adventurer House Rule, in part due to extremely cautious play and good battle tactics on the part of the party.

I just wanted to get this new blog post out. I'll have more Ostschild stuff coming, hopefully soon.