It has been suggested, and I agree, that I should maybe move the contest deadline through the weekend. I have a couple of good reasons for doing this- a number of people have contacted me and said they probably would not have their submissions ready on time, so an extra weekend to work on them might make for a more robust contest; and I am not running a February contest, so it doesn't conflict there either.

So I guess that's about all, unless someone wants to volunteer to judge. I lost two judges this time around, so I am down to three. That's not much of a panel.

Email ThisBlogThis!Share to TwitterShare to FacebookShare to Pinterest
Labels: Contest

So I've Been Sick

For most of January I've been sick and not promoting my contest at all, or blogging to speak of. I just came on today to thank everyone who did submit an entry for the contest and remind everyone that there is still a little over a day left to get an entry in.

I also wanted to get a public shout out and HAPPY BIRTHDAY to my son John who turned 18 today.

So, I haven't been at my computer a whole lot, other than WotC opening the vaults on D&D Classics and me missing my own Blog's Anniversary; did I miss anything important?

I have mostly been doing a lot of reading and laying in bed this month and it looks like it may go on that way for a while longer, so I will not be running a February contest. I have already planned a Celtic themed contest for March though, running from the 1st through the 31st. Warlord Games is already signed on to sponsor that one, so I figure I have to run it.

So I am running a contest here, and maybe I should be promoting it a little more, but I have to say I am a little disappointed at the response so far. The Viking themed contest was so successful I thought that themed contests were sure to be a hit, but maybe I was wrong. My Mongol contest was a bust, I only got one entry. I suppose I should have just declared him the winner of all three top prizes, but I figured nobody wants to win by default. Mongols were somewhat specialized though, so I thought Ancient Rome would be a good theme, easily as popular as Vikings, if I can believe film and literature.

But now the contest is half over and I still haven't received any entries, which is probably a bad sign; and nobody sending me a progress report, which is a worse sign.

So I have to wonder, is it the themed nature of the contest, or did I make the rules too open? Do people just not respond to the Ancient Roman theme? Something else entirely?

Will I be inundated with contest entries as the deadline approaches? I am curious, I generally receive a lot more feedback than I am getting now, and this contest has been advertised to a much wider audience, so I would have expected more rather than less.

Anyway, there are a bunch of cool prizes at stake.

Comment if you have an opinion about my contests, whether it's the theme, the way I run them, whatever; I can handle constructive criticism.

Maybe next time I'll put up a poll to vote on a theme. 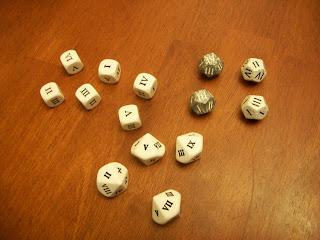 Now we're just waiting for some contest submissions so I can give 'em away! 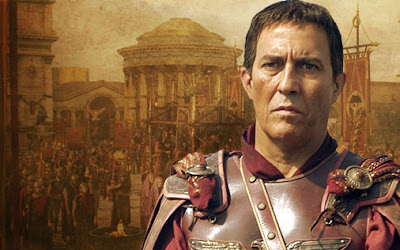 I just want to reiterate all of the contest rules and prizes here and announce that I am extending the submissions deadline until the end of January rather than the Ides, because, while the Ides sounded cool, don't think it gave enough time with the holidays in the way.

So here we go-

The contest is to write an Ancient Roman Empire themed adventure for early edition D&D, AD&D or one of their popular retroclones. One Page Dungeons are fine, but I have had people need more space, so short adventures are acceptable too. I am willing to accept anything you are willing to submit, up to and including huge hex-crawls; every adventure will be judged on it's own merit.

The fine print- I intend to publish these submissions to the web as a free series for the OSR community, if you want to opt out of having me give your work away to everyone, mention it in your submission email.

All adventures should be submitted via email to me at williamjdowie AT gmail DOT com by midnight on January 31st EST. I will then email them to the rest of the judges.

Everyone who submits an entry, or really, really wants one gets a refrigerator magnet. So far the magnets have made it to Europe and Australia, as well as all over the USA, let's see how many continents and countries we can hit while the supply lasts! Just send me your postal address with your submission and my wife will mail it out within a few days, unless you live in Maryland or Germany, in which case I will have to nag her for weeks.

Prizes may be updated, as I am constantly on the lookout for more sponsors and I am not averse to opening my own vault of gaming goods if I think we need more submissions. 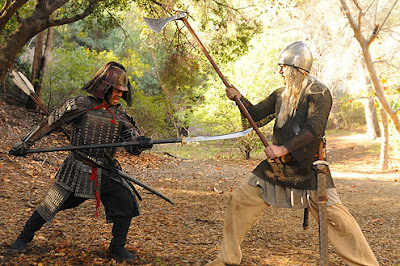 ...and why it should drive my players crazy.

I have a tendency to create entirely new campaigns when we have too long a hiatus between gaming sessions and sometimes just because I got a good idea and wanted to run with it. My players have the patience of Job; week to week they don't know what setting they'll be playing in or if there'll be character generation involved.

They just roll with it. Work and school kept us away from the Norse game for too long? I needed to play some adventures I got for a contest so I could accurately judge them? I am running my Roman themed contest and decided it would be cool to start a new adventure to set the mood for all the new adventures I am sure will start pouring in any day now? It's December and we always play OA in December? I need to play-test my WW II B/X game? They are cool with it all.

I actually said to them last month that part of the reason I keep all the character sheets here is so I can restart old campaigns where we left off if that's what strikes my fancy that week and they were cool with never knowing what campaign or even RPG they are going to be playing from week to week. I have long running campaigns, but they run like British television, you might have three to five episodes then have to wait a year before the next series.

My daughter Ashli has a Halfling Thief character that is probably her favorite character of all time, Ruby Cloverleaf. She's had that character since she was maybe fifteen years old, she's twenty now, Ruby gets played maybe half a dozen times per year. The thing is, I guess, as a DM I'd rather DM something I am super enthusiastic about than just go through the motions if I am losing interest in a game for a little while. Sometimes I need to have a little time to recharge, to think about what's going on in a specific campaign and so taking a break will be my idea; more often than not though, a change of campaign is usually brought on by a lack of gaming for at least a couple of weeks, during which time I will have had a cool idea.

That's not how it used to be. I used to run a campaign practically forever. Being a grown-up and having life get in the way of gaming has kind of put a damper on that. I haven't gamed with the Darryls for months now. I haven't gamed with Lance in the better part of a year, although he says he wants to do some board gaming this week. Lee's new job in the ER has kept her away from our game table for most of the last six months, so it's a nice surprise when she can make it.

I have got maybe the best group of players on Earth, they put up with not knowing what we'll be doing from week to week, just to suit my desire to DM whatever I feel like DMing because I can be fickle. What they don't know is that whatever the genre, where ever it takes place, whatever RPG system is used it's all part of the grand design anyway; it's all one unified campaign setting; everything that happens in one “setting” (or sub-setting) has subtle effects on the others.

I just wish I had the ability to dump my brain onto paper and have it all make sense. When people ask me questions, usually the members of my design team, I always know the answer, pretty much regardless of how esoteric the question might be. The setting exists fully formed in my head, the rest of the team are there to help me bring it out, and to do illustrations. I am no good at art. Poetry might be nice too, setting-wise. Flavor stuff, I know the flavors, I just need some help with getting them to the masses. 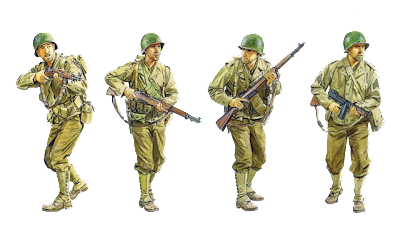 Happy New Year to everyone and I hope that you are all hard at work on you adventures for my contest because I ordered the Roman Numeral dice today for the winners, D4s, D6s and D10s. I'll post some pictures when they arrive.

I also want to pimp the Up FrontKickstarter again, it's got less than a full day left, but it's already fully funded and met every stretch goal, so the 125.00 sweet spot gets you a hell of a lot of game. If you like World War 2 games or card games it's worth every penny.

Now this is going to be short, but I feel like I should mention it, my Aunt June passed away today. She was my mother's older sister and my last surviving blood relative that was a veteran of WW II. My mom came from a huge family, there were 14 kids and she was 3rd from the last, so I have a lot of relatives on her side of the family, but my Aunt June was special and I will miss her.

Now, I am two play reports behind, and, to be honest, I don't know whether or not I'll ever get them done; anything more than a really brief synopsis anyway. The Roman themed game and the traditional December Oriental Adventures game. The Roman game had a bit of a dungeon crawl in it, which reminded me that I wanted to mention that I had really quit doing dungeons for the most part before the OSR came along. Now I have my Viking Mega-Dungeon, the ruined Temple of Apollo just off the Via Salaria and my OA game with it's overland travel and court politics is out of the norm.