Mongol Month Draws to a Close 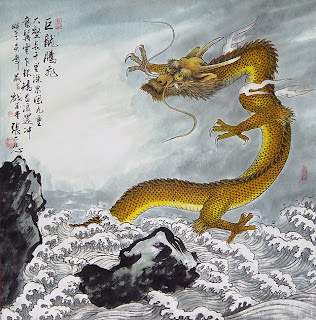 It's a little sad that this month didn't produce a better contest than it did. I was really trying to use it to springboard back into writing and really caring about gaming after my sister died. I spent most of the month though either sick or just depressed still and didn't really promote the whole Mongol thing or my contest particularly. As I write this I am 5 ½ hours from the submissions deadline and I have one short adventure here. I am afraid that I am going to have to call the contest off for lack of participation and interest and I am going to take a hiatus from blogging until I get my self more straight.

To be honest, the holiday season is probably going to be rough for me, so I don't imagine I'll be posting much in December. I have a plan for January though, so I hope that taking December (mostly) off will recharge me and give me the break I need to get my self together.

In the meantime, I still have like 50 of those refrigerator magnets; so anyone who wants one should just send me a SASE to-

If you already requested one and didn't get it, it's because Mona has been swamped, so this is just easier. Sorry, they probably will lack the art.

I'll be lurking around and reading OSR blogs in the interim, I just don't really have anything to say right now.

Posted by The Great Khan at 6:50 PM 1 comments Links to this post

Thanksgiving Update from the Great Khan 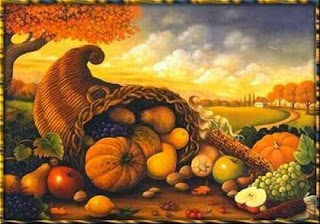 Mongol Month hasn't been a great success for me largely due to the fact that I have been sick for most of it. Cold, followed by the flu, it's been a miserable couple of weeks; once again, I blame my kids for bringing these sicknesses home from school :) Still, I had hoped to be more inspiring for my contest over the course of the month and I have dropped the ball. I haven't even done much gaming-wise except play some Civilization 4 and design a medieval town in the Sims 2 for a D&D campaign; complete with NPCs that have interactive relationships, I don't know why I never thought of this as a tool before.

I have been reading blogs and trying to keep up with the OSR, D&D Next and general gaming news, but I just haven't been compelled to do any commenting on anything until today. Today I figured, since I have the time and I am feeling better and it's been over a week since I posted anything to my blog, I thought I'd mention a couple of things.

First- I got my free miniature from The Assault Group for “Liking” their Facebook page. I really thought it wasn't coming, that I had missed a deadline on that or gotten lost in the shuffle or something because it had been so long since I had “liked” their page for their free mini promotion; as it turns out they mailed it in September. I am guessing customs held things up. Anyway, serendipitously, it's a Mongol General miniature and he's pretty cool. 28Mm scale and way more detailed than I am accustomed to seeing in a miniature from a wargaming manufacturer. Definitely RPG standards of quality there. Maybe I just don't buy enough 28mm wargaming minis.

Second- I just found out that there is an Up Front Kickstarter running. Up Front Was Avalon Hill's Squad Leader card game. I loved that game and I am going into that Kickstarter hard. I have the original version and all of it's expansions and I have been waiting for someone to bring it back into print and expand it some more. My original has been played hard and is starting to get a bit ratty and buying just a replacement set without expansions is generally more expensive than going all in ($125.00) on the Kickstarter. If you like Squad Leader, WW II games or fast paced card games I recommend this one.

Posted by The Great Khan at 10:39 AM 1 comments Links to this post

In addition to seeking the help of an experienced cartographer to help me make a good looking map of my new “Yassa: Legacy of the Khans” campaign world, I also have been stumbling a bit on names for the lesser Khanates. See, in our world Khanates, or Hordes, are named after the ethnic make-up of the people in them, like the Kipchak Horde*, or a color/metal like the Golden or White Hordes, or they are named after the founding leader, like the Chagatai Khanate, or just the geographical place where they are, like the Crimean Khanate. Now I have done this all, but I have also been trying to give them some more flavor, some descriptor that evokes something when you hear the name. Frankly, the well is running dry.

So I decided to run another contest- here on my blog: Name a Khanate (or Horde), I'll put up a poll and the top entries will be put into my new campaign world and you'll receive a credit, my thanks, and if you send me your mailing address, a cool refrigerator magnet! The envelope it arrives in will probably be decorated by my lovely wife Mona too! Send me your prospective Khanate or horde name at williamjdowie AT gmail DOT com sometime before the 27th of November and we'll run the poll from then until the 1st of December, finishing both of my Mongol themed contests at once. Four days of voting should be enough, right? I picked the 27th because it's my anniversary.

Now, while this is a fantasy world, it is more Swords & Sorcery style, there are no “common” monsters, no tribes of humanoids roaming around. The commonest “monster” is man. Think “Conan the Barbarian”, but in a world where the Mongols stomped every other kingdom into the dust. Now it's a couple of centuries after they peaked, and they've broken into a bunch of squabbling sub-empires and the ethnic groups that they conquered are re-asserting themselves in an attempt to overthrow their steppe descended overlords.

Essentially this world's Genghis Khan is a mixture of our Genghis Khan and Conan the Barbarian. He has Genghis Khan's background and ambition and Conan's absolute bad-assery. Think of him like a Frazetta Mongol leading a horde to conquer the world, kind of like this guy- 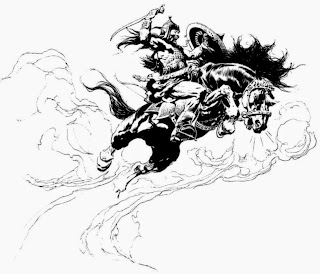 Anyway, I'll repeat my request for artists again, since I got no response last time. I always bury the lead on these things, ARTISTS AND CARTOGRAPHERS NEEDED, contact me if you are interested in helping out with this world design project. I am married to an artist, I appreciate the effort it takes and that you don't want to work for free. That said, this is not a commercial product, but a gift to the community. I can give credit and I'll be happy to send a refrigerator magnet to anyone who helps on the project at all, but as much as I'd like to, I can't afford to budget for artists on a project that's going to be free. I just wanted to get that out there so there wouldn't be any misunderstandings or anything. More art is better, more artists is better too. I'd like to put this together with a cool piece of cover art, some interior illustration and nice maps.

*Yes, I am aware that the Kipchak Horde is an alternate name of the Golden Horde.

Posted by The Great Khan at 2:03 PM 8 comments Links to this post 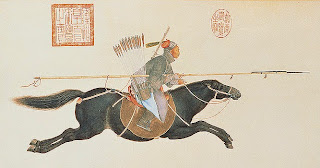 I was sick with a cold for most of this week and didn't blog at all. I also put aside my world building project in favor of playing some Civilization 4 and reading to recharge my batteries some. I am largely better now and will be DMing one of the entries in the Mongol Adventure Contest for my home group tomorrow. The contest is going OK, but I'd be happier with some more entries. I hope you all are still working on yours because I am still working on more prizes.

Posted by The Great Khan at 10:30 PM 3 comments Links to this post 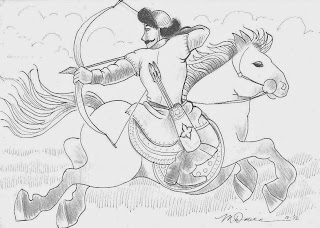 And there's not much gaming, miniature or even Mongol related to report. My youngest daughter Ember's birthday is this weekend and I have a houseful of teenage girls to deal with as a result. I offered to DM a game special for them, but they didn't take me up on the offer. There was some talk about maybe painting some miniatures today or tomorrow, I guess we'll see. I canceled my regular game this weekend for this weekend long "Em-stravaganza" and now I kind of feel like the odd man out in my own house. My wife fits in with them OK, so do Ashli and John. I don't really relate to teenaged girls though, apparently.

So I am spending my weekend trying to figure out why Darryl's computer won't power up. All of the components work, except with his new motherboard. I've done about everything I possibly can to figure this one out, and I am about to say it must be the motherboard, but the same thing is happening with his other system too. All of those components work, new motherboard, won't power up. I feel like it is staggeringly unlikely that both of his new motherboards are DOA, they are from different manufacturers, picked for different systems with different needs. I think it is more likely that there is something I am missing, despite having done this numerous times before and having followed all of the directions, then looked up numerous diagnostic approaches. Although when I put it out there like that it seems like I am kind of reaching for a reason why I am doing something wrong just because I am not a computer repair professional.

Lastly, if anyone reading this has any cartographic skills or is an artist and wants to help out with my "Yassa: Legacy of the Khans" project, email me at williamjdowie AT gmail DOT com I'd really appreciate the help and my regular cartographer is swamped and I'd like to give my wife a break from doing all of the art.

Posted by The Great Khan at 1:52 PM 1 comments Links to this post