So I’ve had a day to think about the passing of Richard Hatch. Like most men my age, when I was a kid I watched Battlestar Galactica and I loved it. My dad loved it too, so it was one of those few things we did together that we both enjoyed. Apollo and Starbuck were my heroes back then, probably moreso than Han and Luke or Kirk and Spock; partly because they were on every week with new episodes. In the days before VCRs being commonplace that was pretty important. I loved Battlestar Galactica so much that I subscribed to the Marvel Comic series. I learned to draw the ships and the cylons. I bought every magazine I could find that had articles about the show, I got the paperback sized Marvel graphic novel and the photonovel, I collected the trading cards. I begged my parents for the Viper toy for Christmas and they came through, I was the only kid I knew that got the viper. I bought the model kits, and I am bad at model building, always have been, but I spent a long time making them and they turned out OK. I even bought the crappy, sub par action figures.

Later on, in my teen years and into my early twenties I gamed Battlestar Galactica. A friend of mine bought the FASA BSG starfighter game, we played that fairly often. I adapted the AD&D rules set, with help from Boot Hill and Dawn Patrol, into a BSG RPG. Later on I did it again with GURPS. I never forgot BSG and I kept on loving it. I bought a bunch of the novelizations I’d missed when I was younger, they made decent source materials.

Close to 20 years after the brief run of Battlestar Galactica I found myself on the internet, a lot, before that was really a thing people did, and I discovered Battlestar Galactica fandom. I knew a few people that fondly remembered the show from 1978-79 before the internet, but when I sought out information back then I found that there were hundreds, maybe thousands, of devoted fans. People who loved the show like I did. I dove into BSG fandom with both feet and that is how I “met” Richard Hatch back in 1997 I think. I can’t remember how it came about, it was either through one of the BSG mailing lists I was on at the time, or on AOL, it doesn’t really matter I guess. I was a little suspicious that he was who he said he was at first, then a little starstruck I guess. I was trying to be cool, but it always made me feel something, honored maybe, perhaps excited, whenever he’d comment on something I wrote, or addressed me directly. We emailed back and forth a few times, after a while, and had one brief, awkward phone call. We lost contact, I broke the contact I guess, but it wouldn’t be long before he was back in the game and wouldn’t have had a lot of time for that kind of personal interaction.

He was a humble guy, really nice and he made a lot of jokes, often about himself. I got the impression that he was maybe a little shy, and wanted us fans to like him personally. We did. He seemed to love the show he worked on in 1978 as much as us hardcore fans did, it was endearing. He is the one TV star that I ever really had any interaction with. He was a good guy and I’ll miss him, despite not having really spent any time interacting with him since the late 1990’s.


I know he had a decent body of work as an actor, but to me he’ll always be remembered best for his role as Captain Apollo on the original Battlestar Galactica. Rest in peace. 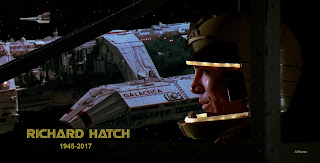