As always, the image is from the Ebay auction. 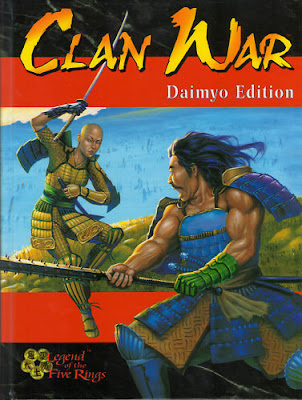 I am a sucker for a good deal. I may never play this game, but now I have two different editions of it; and hundreds of miniatures, maybe thousands at this point. All of this happened because TSR (and later WotC) couldn't be bothered to give decent support to their Oriental Adventures line. I guess it's probably because, at least at first, the OA project was Gary's pet project with his French buddy. When Gary got pushed out the door they had already gone too far to NOT publish something, so David "Zeb" Cook got the call to make it work- and he did; OA was probably the meatiest 1st edition AD&D supplement ever published. Sadly, they decided to let it wither on the vine rather than give it any real support. Sure, they shoe-horned it in to the Forgotten Realms, along with EVERYTHING ELSE from earth history, Al-Qadim, Maztica, Hordelands, ad nauseum, but they really didn't support those lines real well either.


I have to admit I like the idea of the DM bling, but I won't be using them for two reasons. First, they remind me of something that Brian from Knights of the Dinner Table would have come up with, and that smacks of parodizing our beloved hobby. Second, I hate to give away too much of my game. I do mirror ideas back at my players and reward them for good play and death is always possible; I roll most of the time in the open (exception for thief skill checks and secret doors), I am not afraid to use published material, rule 0 is always in play. Gonzo? Check. Improvisation? Check. House Rules? Check. If it's old school I am probably doing it, that's why I play old school. My games are a mix of OD&D, Holmes Basic, B/X and AD&D anyway, so the only one that really knows how everything works is me. My world evolved with D&D and kind of hit a wall with 2nd edition AD&D some of it's stuff I liked (Thief skills), some I loathed (Rangers), over-all it lost the "feel" of D&D to me.

I probably won't be posting much for a while; we're having something of a crisis here now.

Is Google+ Killing My Blog?


Or have I just been too busy with other stuff to blog regularly since my computer woes were ended? I have been working with my dad (and my son) building his enormous garage since mid-July, and it still looks like we've barely started. However Google+ seems to be taking up a large amount of my free time as I try to figure out exactly what I can do with it to make my online experience better. I have been barely keeping up with reading blogs, much less posting regularly; sorry about that, trying to integrate new tech and all, especially since the mighty Google empire already controls Blogger as a fiefdom. I rather expect that somehow all of this will be somehow integrated together and I'd prefer not to be caught off guard when it does.

Also, I went to the central New York Scottish games this past Saturday, which was nice. I don't go every year, sometimes I just forget what weekend it is, sometimes I have other plans, sometimes I just don't have the money for it. The nice old lady from my clan that taught my wife how to make shortbread informed me that my clan hasn't had a champion in the games since I quit competing some two decades ago. On the one hand that's nice to be remembered as the clan's champion, on the other I kind of feel like I let them down when I quit competing. I was never serious about it, just big and naturally suited to feats of strength from growing up in farm country.

Come and get them-

Deaf Pedestrians-Hail to the Geeks

William Dowie took the Hardest Gary Gygax Quiz in the World and got 80%!

You are a Gary Gygax Superhero. If aliens ever invade Earth and challkenge us to a Gary Gygax trivia contest, you will be our champion.

Paladin Code: You completed this quiz without using Google.

I took the quiz- results above and saved also to the to the right for posterity. Now I must know the answers to the following questions: Which of the words does NOT appear in the AD&D DM's Guide? Which game did Gary NOT write or cowrite? and, lastly, What was the command word for Gord's buddy's axe?

As a grumbly old OSR grognard* I have to preface this by saying that I am not a 3e player (anymore), but this is nice. I like all the D&D inspired music coming out lately. Play what edition you like; I like what I grew up with- a crazy mix of Holmes Basic, B/X and 1st Edition AD&D. Since I am usually DMing and the rule book is my brain there isn't usually a problem.

*I turned 42 while my computer was down for repairs. 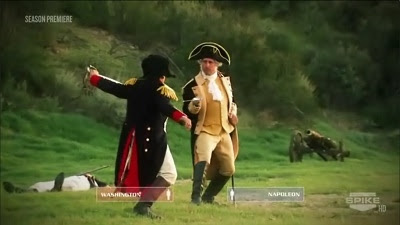 So I finally got around to watching the season opener for Deadliest Warrior.

Really Deadliest Warrior? Really? I am as patriotic an American as any other, but having George Washington beat Napoleon Bonaparte is simply incredible. Deadliest Warrior has dropped the ball on a number of occasions in the past, and in some pretty big ways, but they even MENTIONED ON THE EPISODE that Washington would not have defeated Cornwallis without French help while describing his greatest victory.

Sad. I only really like to watch the show for the cool blowing stuff up/chopping them to pieces, the silly trash talking BS and bad re-enactments CAN be a little fun too, I guess; it is Spike TV, so I guess the over the top macho nonsense is par for the course. I also like it because I get to talk to my kids about history during the show and after it's over, usually for making corrections, although even they could tell the really stupid calls like Comanche over Mongol, or stupid match ups like generic Celt vs. Persian Immortal.

After season 1 they "fixed" the show's format by separating the battles between pre-gunpowder and post-gunpowder era combatants, which screwed over the Knight in season 1. They also moved to a small unit battle instead of having one-on-one fights all the time; this I think is what made the Washington vs. Napoleon episode suck. All of these musket era battles really need to be fought with full armies, sorry if it destroys their re-enactment budget, maybe they could use software for that part too.

Now, don't get me wrong, I ALWAYS expect them to get it wrong on Deadliest Warrior, they have a knack for it; when they manage to get it right I am pleasantly surprised, now that I am done ranting about the injustice done to the memory of L'Empereur I guess I'll go out there and watch William the Conqueror get his ass handed to him by Joan of Arc and unless it's done in a particularly egregious way I'll just accept it with good humor and continue to take the show for what it is- gratuitous weapon porn wrapped in a pseudo-historical context.

By the way, who EVER referred to Napoleon as the "God of War"? 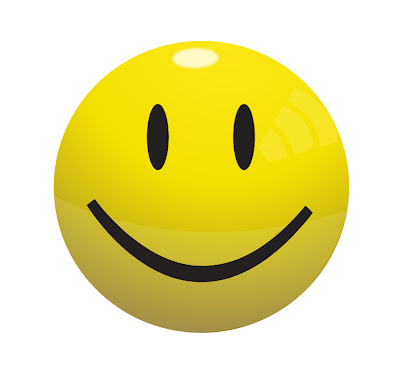 I opted for repair rather than outright replacement*, but it still seems a little sketchy as to how well it intends to work. I spent most of yesterday with it insisting that either my system memory had changed, not booting at all, not booting and giving me a beep code I didn't recognize or hanging at the bios screen; so right now I am pretty happy just to have it up and running. I will eventually finish writing the now nearly month old report on the SCA Mêlée event I went to, and that'll probably finish my lengthy series on Shields, Helmets and Mêlée tactics and D&D.

*Not just because it was the cheaper option, but because there are new technologies that have either just entered the market or are about to enter the market that I'd like to take advantage of, and I hate to get hosed on the price while I essentially beta test new hardware. I have been down that road too many times in the past.