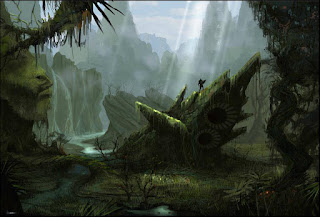 I started writing again, pretty regularly, after I had more or less decided to quit this and start another blog, at least for a few posts, then I went on a communications blackout again. This time it happened because I started writing a post about how using ideas that you think suck when you first have them, or actually using elements of a game that you personally dislike, can actually lead to some pretty cool stuff. I started writing about how I kind of hate Gnomes in AD&D, and then came up with a pretty cool Gnome-based idea for my new AD&D campaign. So I wasn't ready to share it just yet, and I kept on working on it. I also started running a new AD&D campaign, we're two sessions in now, and I keep getting lots of cool ideas that I want to work on, so I have been. Again, something I can't really share just yet. Additionally, the AD&D Oriental Adventures group I started on Facebook a few months back has started to take off a bit, so I have been spending a bit of time making sure I keep up with that, since it's my group, my responsibility. Then there have been a few KAG related things I've been doing some work on, and lastly, but not least, I have another idea for a new (A)D&D campaign that I have been thinking about some, so I am writing that stuff up in my “campaign ideas” document; which I started specifically to document any ideas I wanted to explore for use at a later date- either because I didn't have an active game going, or I was running something else but didn't want to lose a good idea. I've been looking at a lot of “gonzo” old school stuff lately, and it has inspired me. That and Whitestar. 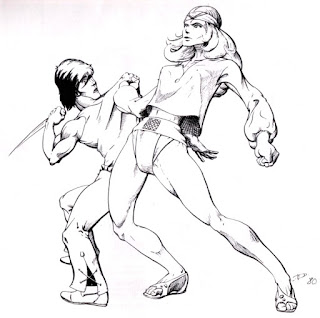 Monks, love them or hate them, are part of the AD&D landscape. They have been around since the early days of the original D&D game, from the Blackmoor supplement in 1975. Ever since then they have been crapping up D&D's (and AD&D's) pseudo-western European fantasy vibe. They yanked them from the D&D line with Holmes Basic (which was really basic) and they weren't in B/X, but they returned there, renamed the Mystic, with the Cyclopedia, maybe BECMI, I don't know, I only ever had the Companion set for that edition. 2nd edition AD&D dumped them, although it's possible they showed up in one of the eight million splatbooks. They definitely made a return as a core class in 3rd edition*, and were/are presumably in 4th and 5th editions**.

I work, mostly, with 1st edition AD&D, so eventually the subject of Monks always comes up. They make decent villains, as the Scarlet Brotherhood, in Greyhawk; and, as such, appear in several AD&D modules set there. Greyhawk is about as close as you really get to an official, core, 1st edition AD&D setting. It belonged to EGG, pretty much all of the published modules are set somewhere in the World of Greyhawk, pre-1985 anyway, and Greyhawk means acceptance of Monks. So does 1st edition AD&D, by the book.

We may not use every single rule when we play 1st edition AD&D, for instance we mostly ditch weapon vs. armor, but it's tough to justify getting rid of a class from the Players Handbook. Assassins are probably the only other class people ever try to ditch, and you have more justification for that- I often run with a “No Evil Aligned Characters” house rule to promote a more cooperative and heroic style of game. But with Monks, we're just kind of stuck with them***, if we're playing AD&D.

It's hard to remove that whole Shaolin Kung-Fu image from them, and that flies in the face of the rest of the AD&D aesthetic. They should be tonsured and live a simple, contemplative life, away from the concerns and squabbles of the secular world, devoted to their deity, in short, another brand of Cleric. I keep trying to find a way to make the Monk Class seem more like traditional European monks, to justify their existence in an otherwise largely Western European assumed setting. Maybe something like Friar Tuck? I know he's not a Monk, but a Friar, but in a pseudo-European context isn't that what adventuring Monk would be?

I don't really offer any solutions to the Monk problem, I just wanted to air my thoughts on the subject a bit. What does everyone else think? Are Monks fine in AD&D? Do they need some sort of reskinning for a more western medieval setting? Do we say to hell with verisimilitude and go with it anyway, because it is a FANTASY world first and foremost?


*which should have been either called 3rd edition AD&D, or like 5th or 6th edition D&D. Does Cyclopedia count as a different edition than BECMI? What about that black basic book from the 1990s?
**I actually own, and gave a read through of 5th edition, but I honestly can't recall if the Monk was present, and I am not interested enough to go look it up.


***Mostly, I have run a long standing game in a world without any Monks and never had anyone complain.