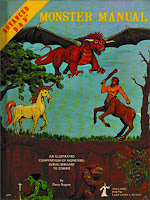 I don't think it's a secret that my favorite D&D is AD&D- 1st edition, from back in the days when you didn't need to quantify your edition. It seems to me that most OSR folk remember AD&D fondly but prefer OD&D or B/X. They certainly have encouraged me to give both of them a try, and, by and large, I have enjoyed it. AD&D is pretty much where the “power creep” between editions started, I get that, but I still can't think “Fighter” without thinking 1d10+CON bonus/level HP; decades of playing and DMing have drilled this into me. 1st and 2nd edition AD&D. There are, doubtless, other examples, that was just off the top of my head. 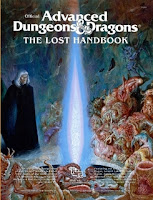 I just ordered a “new” 1st edition AD&D book from Lulu- “The Lost Handbook” a compilation of AD&D articles from “The Strategic Review” and “The Dragon”. “The Lost Handbook” is over 500 pages of “new” AD&D material, much of it new to me anyway, and for what isn't it saves me having to dig through my back issues of Dragon to find stuff, probably the best $14.28 I've spent in a long, long time. 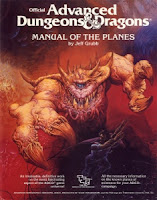 I also just realized that I don't actually own a “complete” set of 1st edition AD&D hardcovers. I never owned, and only skimmed through my friend Darryl's, a copy of the “Manual of the Planes”, nor have I ever owned, or even skimmed through a copy of “Dragonlance Adventures”. I understand the latter, I always loathed Dragonlance; but the former was most likely an oversight or something. I was never really all that interested in planar adventures, and, as I recall, it seemed pretty technical. I guess I'll look for copies of both now though, just because I am a perfectionist when it comes to the completeness of my hoard. 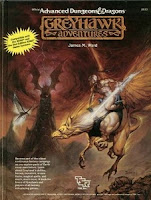 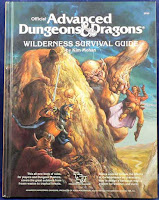 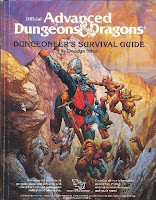 That said, I own and have read through a few other AD&D books that I have had pretty minimal use for, “Greyhawk Adventures”, “Wilderness Survival Guide” and “Dungeoneers Survival Guide”. Each of them are of limited utility, in my opinion. I have seen partisans for the two survival guides, particularly the one I like the least, “Wilderness Survival Guide”, to each their own I guess. Maybe it's that I bought these books long after the 1st edition era, all within the last five or six years, so I don't have any fond nostalgia for them.

“Greyhawk Adventures” suffers from little to no use primarily because I don't run a Greyhawk campaign. I like the concept of 0-level characters, but I have never used the rules. I guess the new spells might be OK, again never used them. The Greyhawk deities were of no use to me by the time it was published.

That being said, I also have little use for, and general disdain for “Unearthed Arcana”. I am a bigger fan of “Unearthed Arcana” than the aforementioned tomes, just because it has some redeeming qualities- new spells and items, demi-human deities although I don't think I have ever seen them in play. I don't totally hate the concept of Hierophant Druids, although I've never seen them in play. I think we can all agree that Cavaliers and Barbarians are an abomination. I am, in theory, favor of Weapon Specialization for single classed Fighters, but I have seen that some OSR people hate it. I can honestly say I rarely use(d) any of this book, probably because I didn't actually own it until, roughly, the 2nd edition era. My friends Darryl and Lance each owned a copy, which I could borrow from either one of them whenever I wanted, so I just put off buying a copy. I did think it was curious that it was given the Premium Edition reprint treatment, if I'd been WotC I'd've likely just reprinted the core three books.

“Oriental Adventures” is a love-it-or-hate-it kind of a book. I love it, warts and all, but I can see why a lot of people don't. This was the only AD&D book I pre-ordered at my FLGS (at least as local as it got for a country boy like me)- the late and much lamented “Twilight Book and Game Emporium” in Syracuse, New York. The rose-colored glasses of nostalgia are in full effect for me, OA rejuvenated waning interest in AD&D, and RPGs in general, for my group back in '85. I have heavily modified the character classes and the non-weapon proficiency sub-system for play over the years, but I still love it and I think OA1 “Swords of the Daimyo” is maybe the best sandbox ever released by TSR. 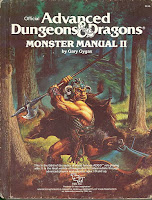 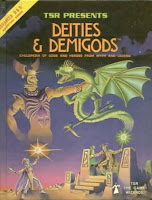 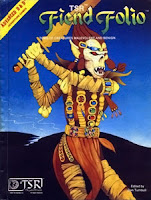 Aside from OA, I was always pretty much a “core books” kind of a guy, “Monster Manual”, “Players Handbook” and “Dungeon Masters Guide”, sometimes with “Deities & Demigods” added for when religion entered the game in anything other than it's “Yeah, my Cleric has a Deity” kind of a way. “Fiend Folio” and “Monster Manual II” were kind of under utilized too I guess. This probably stems from my introduction to (A)D&D- Holmes Basic→AD&D and the X half of B/X concurrently, and all of them within no more then eighteen months of each other, as I was learning the game. I played D&D for the first time in early 1981 (I just checked, it was the week after I saw the movie “Excalibur” in the theater, which was right after it came out). I distinctly remember “Fiend Folio” being the new book. “Monster Manual II” came out around the same time as “Unearthed Arcana” and “Oriental Adventures” in 1985, so I really remember those being new books, and, while new books had their novelty value, most of us in my neck of the woods stuck to the tried and true- MM, PH & DMG.

I have to wonder what my experience would have been if I'd found that boxed set a year or two earlier, or been introduced to D&D via B/X. I remember finding a book store, after I'd discovered (Holmes Basic) D&D and already moved on to AD&D, where I spotted the original D&D books. It was in a mall we never went to, I tried to hunt down my mom and dad to get them to buy them for me- but when I found them they decided it was time to go. I never saw any of those OD&D books again until I spotted them on the internet. After I moved on to AD&D and realized there was a distinction at all, I had nothing but disdain for Basic. I never owned a Moldvay Basic set until I started reading about how great it was on OSR blogs and grabbed on off Ebay, despite the fact that I freely used my Cook/Marsh Expert set all the time, at least until 2nd edition AD&D came out. The only Mentzer set I bought was the Companion set, and only because it had the War Machine rules that were hyped in Dragon at the time.


Now that I look back on it, that was kind of odd behavior for me. I bought pretty much every TSR boxed set I could afford, when I could find them- “Boot Hill”, “Dawn Patrol”, “Marvel Super Heroes” and their minigames too. I was an early to mid 1980's TSR fanboy, except when my AD&D snobbery kept me from buying into the D&D product line (for the most part, I did pick up a lot of D&D stuff when Kaybee Toys periodically purged the D&D stuff from their shelves, since it was so cheap and compatible with AD&D).