Time to up the ante 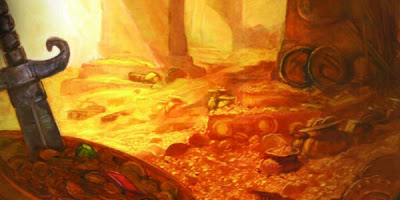 I haven't received a single entry yet for my new Mongol themed contest yet, so I am going to open the vault and declare my prizes, regardless of what any sponsors pledge additionally.

First Prize - Tom Wham's "The Great Khan Game", it's theoretically both a Forgotten Realms product and a 2nd edition AD&D product from the labeling on the box, but in reality it is neither. Instead it's just a fun beer and pretzels game. My copy has been played a few times, but not since it was new. I gave it to my brother and he never played it despite loving the game, because he couldn't find opponents that were interested. Eventually it made it's way back to me. The box has some serious shelf wear, so it's to play not collect. Now it can be yours!

Second Prize - Al Qadim: A Dozen and One Adventures boxed set. This is an AD&D 2nd edition accessory for the Al Qadim campaign setting. I liked it and read through the short adventures, but never ran an Al Qadim game, so a lot of the specifics were of little use to me. This box has some shelf wear too and I can see one corner torn, again, not a collector's piece, but in good shape otherwise.

Third Prize - The Double Lankhmar Combo pack, 1st edition AD&D's "Lankhmar: City of Adventure" and 2nd edition's "Lankhmar: Thieves of Lankhmar". Both are in reasonably good shape for their age, but are really meant for play rather than a pristine collection.

So, I am hoping this will entice at least three people to write adventures for my contest!