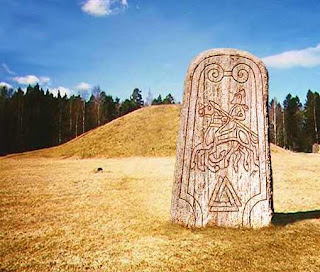 In explanation I suppose I should explain the shift in genres here, when I wrote last time I was GMing a Legend of the Five Rings game and waiting on word back from the designer of 43 AD before moving ahead with it. My son asked to play AD&D at home again, and, serendipitously, I had just handed the GMing reins over to Darryl in the L5R game. Autumn approaching, I decided to pick up the aborted Viking campaign that we had barely started with the pregens I made. The pregens weren't real popular though, so I decided to let everyone make their own characters to play and make this equipment list to print out for them. We're also adding in a few house rules. No Clerics, Shields Shall Be Splintered, D30 Rule, 0 Hit Point Rule, and maybe a critical hit table from Star Wars Gamer. We're going to use the no Demi-Humans rule from the Viking Campaign Sourcebook from 2nd edition as well as the new classes and the "Gifts". I am also going to secretly track Glory to see if they attract a God's attention or if they get to go to Valhalla when they die, I got the idea from the Saga minigame from TSR.

I had written a much more complex version of this and decided to just rewrite the whole bloody thing rather than force my players to learn to wrap their tongues around all the Old Norse words, weights and measures. I am also altering the more complex coinages of the early medieval period down to, at least for the present, three and they are all Silver, Silver Pennies are equivalent to an AD&D Silver Piece (but weigh in at about 20 to the ounce, rather than 10 to the pound; or about the weight of a modern American dime); the Half-Penny, which is 1/2 the size and value, and the Arab Dirhem, which is twice the size and value. Most stuff is being repriced by me, because I like to make the equipment list representative of the actual Viking Age, rather than some generic fantasy version of it. 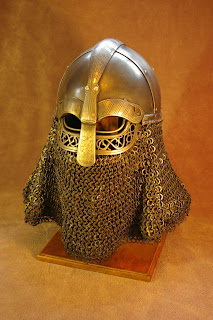 *The "improved" part of the helmet is Oculars, or Cheek-Guards, or an Aventail, perhaps even a Full Face Mask- each improvement is going to add 100 SP to the cost of the helmet and the protective value of improvements is only going to come into play versus called shots or critical hits, so your mileage may vary.

**Scale and Lamellar are not native armors to the Norsemen and really are anachronistic to the early period in which we are playing, but in the interest of keeping PCs alive and having some more diversity of appearance, I am going to allow them. They come from the east, Byzantium and the Saracens, the steppes of Russia. 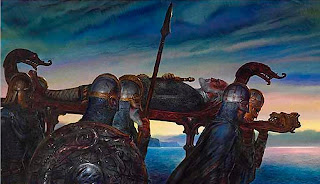