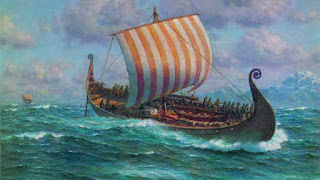 How D&D does your game have to be to still be D&D? D&D is the lingua franca of RPGs, and I use the D&D chassis to run games in any genre or setting. I am currently running a pretty standard D&D campaign based around Stonehell Dungeon, although set in my own long running Garnia campaign setting. I was going to start a second group in the same world, in a different area and stick in the Isle of Dread, WotC decided it travels around anyway, so why couldn't it come to my campaign world? Anyway, I have also been fairly obsessed with the idea of running a Norse/Viking campaign lately, my girlfriend likes Vikings and said she'd be interested in trying it, so that's a plus there.  I have been adding in a few house rules, and “Shields Shall Be Splintered”, along with “Death and Dismemberment” have crossed my path again, and they are both pretty Viking-ish rules, which got me thinking some. Then I saw on Facebook that it was the anniversary of “Land of the Lost”, and started thinking of Vikings and the Isle of Dread combining into a Vikings enter the Land of the Lost combo of the two, which seems pretty cool to me. Obviously the Isle of Dread and the Land of the Lost aren't the same, but they do have a bunch of similarities. The video game “Lost Vikings” comes to mind too.

So now I am mentally altering the Isle of Dread to more closely resemble the Land of the Lost, conceptually, and I got to thinking that these Vikings aren't going to be a “regular” D&D party. For a more “realistic” campaign, they should all be Fighters or Thieves, or maybe port the Specialist from LotFP into my OSE based game? No magic though, for sure, right? Or maybe? If I look at how the Norse saw magic as existing in their own world, maybe I could somehow adapt it. Rune magic was done in “The Northern Reaches” gazetteer for BECMI I think, although I have not read it. It is also present in the “Viking Campaign Sourcebook” for 2nd edition AD&D, although I don't remember liking it there. Norse magic is about subtly altering wyrd, not blowing your enemies up with fireballs, it can include divination or communing with the dead, but mostly it's about altering luck, either yours or an enemy's. Runes, seið, Galdr, none of those are flashy D&D magics, even magic healing isn't instant; so I guess magic could be an issue. My thought is maybe make a “Cleric” class that can do these things? Or add them as a skill set of some sort to any PC? Or just go the “no magic” route? I was thinking of a Skald class too, that had some skills that could help the party? Maybe non-magic oriented?

Something else entirely? How much D&D can I strip out of D&D and have it still be D&D? Does D&D require magic? I am thinking that the Isle of Dread is going to have some weird magic stuff going on, and probably some high tech too, in keeping with the spirit of the “Land of the Lost” series. Can we have D&D without Magic-Users and Clerics? Will people want to play such a game? Who knows. Maybe let PCs take on these classes after getting to this world? Is that cheating the system?

I am also considering starting the PCs at roughly 4th level (the recommended starting level for X1) and having them already have as many retainers as they are allowed by their charisma scores, to represent their personal households, warbands, what have you; my thought is that they are all members of a single ship crew to start. I may have them shipwreck on the isle of dread, I have had some good success with that as a start to the module in the past; although taking away the party's greatest asset at the beginning might be a bad idea too.

My memories of “Land of the Lost” are pretty distant, I may need to track down and watch the series again before I launch this thing, assuming my players want to play a “Lost Vikings” type of game. I might suggest some movies for my players to watch leading up to the game too. “The 13th Warrior” comes immediately to mind, maybe the TV series “Vikings” too. Need to get people into the spirit, portray Norse characters as well as they can, without me recommending a slew of Sagas and history books.