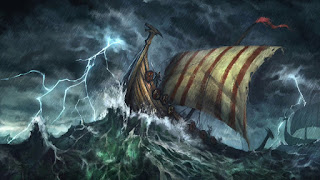 Trying to work on the house rules document for my proposed Vikings game, a good set of house rules sets the tone for the game, here I am going for something serious, kind of grim, but also heroic.

The shield needs to get more love, because there's not much in the way of other armor. I was leaning towards making a shield give 50% cover from missile attacks, provided you aren't surprised or engaged in melee; along with some kind of level scaling fighter class bonus to AC, and a shield wall bonus. Shields Shall Be Splintered is an obvious choice here too, although I did recently see something about usage dice for the shield that could be good too.; a usage die makes for a good compromise between tracking shield damage and having essentially indestructible shields. A shield needs to be both more useful and more destructible for this game.

The helmet should get something better than the standard nothing too I guess, I am thinking a +1 to AC there. Seriously in standard D&D there's no good reason to wear a helmet. I have always like that in Talisman the helmet basically gives you a saving throw versus losing your hit points, but that seems to over powered and fiddly for D&D.

The equipment list could stand to be shortened, simplified, tightened up. I am thinking one armor – chainmail, you are either armored or unarmored, that's it. Lighter armor is not attested to in the sagas, nor has any evidence been found by archaeologists. A few lamellar plates have been found at a single site in Sweden, so I think it's safe to skip. Make chainmail a base AC of 5 [15], unarmored a base AC of 9 [11].

The weapons list can reasonably get edited down to Knife, Sword, Axe, Spear and Bow. Technically there is some variation there, 2 main styles of knife, one of which can overlap into sword, axes should probably get split into one and two handed varieties, and there are some small variations on spear type, but I don't think they are large enough to bother making them extra weapons based on that. The sagas speak of a type of polearm similar to a glaive, but none have ever been found, and given the funerary practices of the Norsemen, that makes their existence seem less likely.

Weapons need to have properties that make them mechanically different, other than just the damage range, in part because I am considering a class based damage system. The axe seems simple, give them an advantage of some sort against shields, which plays into the shield rule ideas I have. Spears can have reach. Swords though? Other than their obvious prestige item status, what should they get? Bows are a ranged weapon, and I kind of want to encourage melee combat, because it seems more Viking in spirit, and actual historical practice too. Knives might be used in an off hand, and could be thrown, maybe they also can be used while grappling/being grappled?

Berserkers need to be in the game, although I have had mixed results having berserkers in adventuring parties in the past, it just wouldn't feel like a Viking game without them.

The concept of Fame or Glory is one I like from the Saga minigame from TSR and have always wanted to steal for an RPG. Basically it rewards you for the things you are already getting rewarded for in D&D, but kind of the inverse of the way that D&D does it for leveling. In OSR D&D at least, you get more rewards for treasure than combat, Fame is the opposite. In practice it tracks whether or not you are going to enter Valhalla, attract the notice of the Gods (for good or ill), and, as a zero sum game, decides the “winner”, that is to say who is the greatest hero of his age. I have been thinking about adapting it to D&D since Saga was new.

On to Wyrd, or Fate. On the one hand I like the idea of having a secret stash of “get out of jail free” cards for the players, maybe a hidden number, perhaps rolled randomly at character generation, that will keep a character from dying at a given time. They are simply not fated to be dead yet, “the length of my life and the day of my death were fated long ago” and all. I admittedly have stolen the idea from TSR's Top Secret RPG. I also have considered the idea that Wyrd might be a “mana” pool, for spell casting or whatever. I am still hazy on this, but magic, in an old Norse context, is about manipulating Wyrd.

So classes then... A straight up Warrior, a Berserker, a Skald and what else? Some kind of Thief/Scout type? Say “to hell with the initial concept” and hand wave in some magical classes? The zero level NPC crew members will be like the Torchbearers and Men-at-Arms in my current game, they work pretty well and have possible advancement built in to them.

I have a seed of an idea for some background/social class stuff too, I figure anything that helps define the character for role-playing purposes has to be good, right? That might be some kind of old school heresy there, but I liked the family, birth right and ancestry from AD&D's Oriental Adventures book, despite it actually making character generation take twice as long. Some kind of pared down version of that might be nice, and the extra time is made up in not having nearly as large an equipment list for players to obsess over. Maybe something quick and dirty like the “Gifts” table in the Viking Campaign Sourcebook? Although I kind of want to avoid some of them, based on my desire to take absolutely normal humans and place them in a fantasy setting, which is a campaign set up I apparently keep coming back to; I did it with the Mongol invasion of Japan, I did it with Vikings once before, I did it with ancient Gauls and Romans. That's just off the top of my head, I've probably done it with others too.

Also, on a completely unrelated note, did I just dream up the idea of Elves being turned as though they were Undead of equivalent Hit Dice? Because they are soulless creatures of Chaos? So, I was sure I had read that somewhere, I have even used it in a campaign before, but I thought I had seen it elsewhere, like on a blog somewhere, back when blogs were where the OSR was happening, before G+ and all that. To be honest, I was sure it was a Lamentations of the Flame Princess rule, but I looked it up and their Clerics get Turn Undead as a spell, rather than an innate ability, and there's no mention of Elves in the spell. I am happy to claim credit for the idea if it was mine, but I was sure I saw it elsewhere. I have been looking, on and off, for weeks though and found no evidence of it. In my mind's eye I can see a black & white illustration of an Elf recoiling from a Cross even, so this is some Mandela Effect territory here.