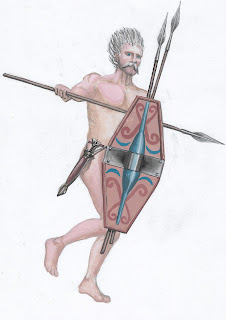 Starting as far back through the mists of time as I can, I am creating a class for the Celtic Adventure Challenge Contest in hopes that it may inspire some more of you to enter. To be honest there isn't a whole lot known for sure about the Gaesatae. Polybius tells us the name means “mercenary”, but it literally means “armed with javelins/spears” in Gaulish, and is a cognate to the Irish Gaelic Gaiscedach “Champion”. You can learn that from wikipedia though, I just looked it up there as a refresher myself. I am making them an alternate take on the Fighter class, one that eschews armor other than a shield and helmet (maybe). They appear to have been a pan-Gaulish warrior movement, similar in nature to the Norse Jomsvikings, but with more evidence of their actual existence. It's partly a warrior society, partly a religious cult, so I'll be adding a few religious bits there too. These are the “naked” Celtic warriors that struck fear into the hearts of the Romans.

A few cultural bits might be useful going into playing this class, so, in no particular order of importance we have-

Head Hunters. The Celts are head-hunters, they take the heads of important or valiant enemies as trophies. They would preserve them and bring them to feasts and talk to them, there was also a trade in prestigious heads.

The Torc. A torc is a neck ring, and it has some religious significance to the Celts, they were known throughout the Celtic world and were important enough to a warrior that he would rather not go into battle without it, even non-Gaesatae warriors wore them, and it is said would put them on before armor or weapons in an emergency situation. They were generally made of as precious a metal as the warrior could afford, examples have been found in bronze, copper, silver and gold (although primarily bronze and gold); and as ornate as possible. It is also possible they were used as a form of currency. In any case, every Gaesatae should have one.

Fearlessness is somewhat religiously motivated. Celts were said to be fearless in battle because they were certain of their afterlife. An account I read spoke of warriors making deals to pay back debts to each other in the next life if they died in battle. Their fearlessness is such that they accidentally disrespected Alexander the Great when he asked them what it was such great warriors as themselves feared, expecting the answer to be some idle flattery like “you alone my lord”, instead they answered that “they feared only that the sky above might fall”, which is to say “nothing really”.

The head is the seat of “personhood”, this may be the motivation behind head hunting.

All right, the bullet points about the Celts and their culture done, I guess you can see why the Romans saw them as barbarians. We have inherited much more of the Roman attitude than the Celtic one about most things in our culture.

Completely untested, and no doubt with balance issues, I present the Gaesatae

B – Gaesatae base encounter move goes up to 50'/round unencumbered. When a Gaesatae defeats an opponent of equal or greater level/hit dice and takes a round to remove it's head as a trophy, they cause fear as per the 1st level Cleric spell. This only applies to humanoid creatures with heads, creatures that are immune to fear will be unaffected. Natural AC increases to AC 7.

C – Natural AC increases to AC 6. Base encounter move increases to 55'/round unencumbered. 1d4 1st level Gaesatae approach to become apprentice/followers, treat as retainers with a base morale of 10.

D – Natural AC increases to AC 5. Base encounter movement rate increases to 60'/round unencumbered. The Gaesatae now causes fear (as the 1st Level Cleric Spell) in all opponents of 4HD or less within 120'.

Gaesatae must have a minimum STR 12, DEX 12 and CHA 9, they have no Prime Requisite and do not receive XP bonuses.
Gaesatae can use any weapon, but they eschew the use of armor other than a shield and helmet. They must be unclothed save for wearing a torc to use any class abilities. Gaesatae save as Dwarves of equivalent level.

I suggest using this generator for names here