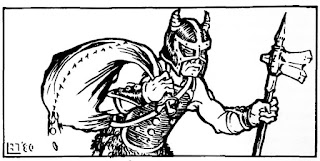 A cool bit of Erol Otus Art to set the mood.

So lately I have been running an Old School Essentials (B/X) campaign centered around Stonehell Dungeon. We're 10+ sessions in, have had several PC deaths along the way, and about half finished with the dungeon's first level (the north half). I created a pretty half baked new campaign world for it, just a nearby town to rest and resupply at, with a steady flow of Meatshields created help to hire on. Essentially dungeon/town. Kind of Keep on the Borderlands inspired.

I am not going to lie, it's a tad outside my comfort zone, and I keep forgetting to do some standard megadungeon stuff, like track torch/oil use. I also need to start restocking the dungeon some in the cleared areas. I have been running overland/political adventures with smaller locations and dungeons, mostly using AD&D for a long, long time now, and that's how I am comfortable. I am still getting used to the more frail characters in OSE (B/X), and the save or die poisons are somehow also a bit of a shock to me (that's killed a few PCs and NPCs now), despite their use in AD&D as well. Maybe I have been relying on using my own material for too long, and subconsciously avoiding the use of poisons?

I have traditionally preferred to use my own settings and adventures to run games, so running any canned adventure is going to be a bit of a challenge for me. They make me less certain somehow, like I am always thinking I missed or forgot something, and sometimes it's true. I have occasionally screwed up an encounter, or missed a locked door (or added one) or any of a number of other minor things here and there when running other people's adventures over the years. The one page dungeon format works pretty well for me, what with all the relevant information being right there, and being pretty close to how I write stuff for myself to run. That said, my stuff could never be run by anyone else, my adventures are more like notes used to trigger my own memories, and I change things on the fly to fit what we're doing or because I got a better idea in the moment pretty often. Plus sometimes I just make stuff up along the way, I have gotten pretty good at things like turning a random encounter in to something that seems like an important planned encounter, and random lair generation in my head on the fly.

Anyway, that's what I have been running lately, Stonehell.

I do have a contest coming up here on the blog though, and I am running a poll to see what the theme will be. There's a poll in the Facebook Group running, if you don't have FB just comment here on what you'd like to see and I'll add the votes here to the poll tally. The poll choices are Celtic, Norse, Roman, East Asian (China/Korea/Japan), Mongol, Norman/Crusader, Greek, Egyptian, Gonzo D&D, and “Straight up D&D (No Theme)”. You can also add a category to the poll if you like, suggest it here and I'll add it there too, Voting through the weekend, I'll do the final tally Monday morning; vote for your favorites, but no more than three please!