I Am The Historical D&D Guy 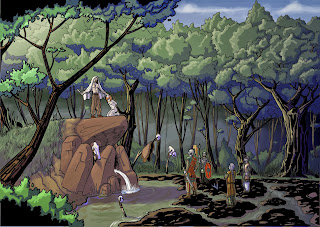 I am the historical D&D guy. I realized that today after watching Jason Graham's FB Live video this morning, and I don't know why it hadn't occurred to me before. I went to college for history, it's always been a passion of mine. My living room is encased in book cases, most of which are filled with history books (most of the rest are RPGs). On some topics I have a better selection of works than the universities I attended.

My wife Mona used to say that my D&D campaigns come with homework, and it was only half a joke.

When I prep a new campaign I almost invariably read some kind of history, even if it's just a “daily life” kind of a thing. I create new equipment lists as a matter of course, keeping the gear to a specific time and place that fits my historical/cultural theme, and there is always a theme, whether I planned it or not.

Sometimes my stated goal was to immerse the players in a campaign setting modeled on a historical culture completely. I started doing that before the 2nd edition AD&D HR series arrived on the scene, my first “Viking” campaign predating the Viking Campaign Sourcebook by maybe a year or so, I don't remember when it came out, but my Viking campaign started in September of 1990.

I can't stop myself from making pseudo historical settings. My longest running D&D setting “Garnia” (created circa 1982, long before I went to college and studied this sort of thing) was essentially a “what-if” you took groups of people from earth and planted them on a fantasy world. It started with ancient Celts, a pan-Celtic religious movement really, started in northeastern Gaul by a Druid Seer that saw the coming of the Romans and the destruction of their culture and way of life. In the late 1990's I ran a campaign set on earth during that time, the PCs were essentially early converts to the cause, being from the tribe where the Druid resided, the Boga-Treveri (who I made up as an offshoot of the historical Treveri tribe). They wandered Gaul attempting to unite the tribes into a single nation to avert disaster, as well as spread the word to the rest of the Celtic nations. I don't remember all of the characters now, and the campaign notes are long lost, but I do remember one of the PCs was a Druid that studied under the Druid Seer that had made the prophecy, another was a half German warrior bard.

I created Ostschild for a random group of D&D players I threw together, it was set in a mythical kingdom in central Europe, it's king was an elector in the Holy Roman Empire, the entire place colonized by Frankish warriors from the period of Charlemagne to hold back the hordes of the Elf-King who was invading from the Fairy realm in the east. There's more to it, but I did that for a campaign I started as “straight” D&D with B1.

I used to think I was the Oriental Adventures guy, but even there the hodgepodge of D&Dism, fantasy and east Asian culture needed refinement for me. I turned to history to make it happen, then Japanese samurai films, then their historical novels, manga and anime. OA has always been, more or less, feudal Japan for me, probably because of OA1 being such a good sandbox to run. OA1 “Swords of the Daimyo” is set in Kozakura, Kara-Tur's fantasy Sengoku Jidai era Japan analogue.

Most of my D&D games tend to be fairly low magic, more gritty-realistic than the high fantasy that we usually see in D&D. Most of my players avoid playing magic using characters too, I don't know if they are reading subtle signs I am sending out, or if old school D&D just has too great a reputation for being hard on Magic-Users. Like EGG, I assume that people are going to want to play the fighting man, the hero, you know? But I don't think I am projecting my bias onto the players.

Anyway, I am good with being the Historical D&D Guy.

Now, on the contest front- I have already received one submission, and it's pretty good. I do need to add an end date for submissions though, so I am going to say April 15th, Tax day here in the US (and my late sister's birthday), so it's easy for me to remember. Midnight US Eastern Standard time April 15th for submissions, just like taxes.