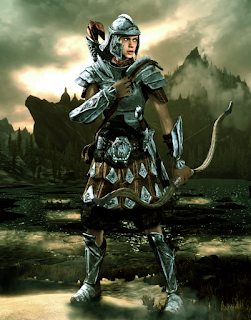 Archery sucks in early editions of D&D and here's why; it's either under powered or over powered, depending on rules and interpretations of rules. This actually includes all ranged weapons, bows just seem to suffer the worst because of their commonness of use.

I don't know Chainmail well enough to comment on the relative effectiveness of archery in that game, but I am quite familiar with most iterations of TSR era D&D/AD&D.

The game seems to be originally designed to emulate the early medieval period, up to, just barely, the high medieval period. The bow didn't dominate the battlefields of medieval Europe then. Cavalry was only beginning to really dominate. Heavily armored and well armed, they took a small fortune and years of time to train properly, and even then, often fought on foot, because of siege warfare being more common than pitched battles on open ground.

Similarly, most of D&D, especially at lower levels, is traditionally spent in dungeons. Bows are mostly useless in dungeons, because encounter ranges are so short. AD&D giving bows a better rate of fire actually makes this worse, because people are loathe to give up their multiple attacks per round weapon, and the missile attack adjustments for Dexterity are better, making them seem like a more viable weapon to higher Dexterity characters.

Don't fall for this. You'll get stuck in a cycle of retreating from enemies (to try and avoid melee), and firing into melee. In the first case you end up basically disengaged from the combat, in the second you become an active hazard to your own party.

So, to avoid this, remember (or learn about) the period D&D was based on, and that trained melee fighters are the kings of battle. This is the post-Roman western European world, with the Viking age, and a host of other hordes invading, endemic internecine warfare and small kingdoms built by previous barbarian tribes on Roman ruins. Largely the bow is a tool used for hunting, they mostly weren't strong enough to have their arrows penetrate armor, and the kind of regular training as groups like the English used at Agincourt were centuries away yet, and the technology of the longbow itself was still a new thing; it's armor piercing arrows were also a long way from being invented.

D&D was designed with the vision of people playing characters like Beowulf or Conan, or maybe King Arthur and his knights. The vision wasn't to have snipers dominating the battlefield. You can play that, but you are fighting the system, instead maybe, if you absolutely do not want to play a heroic front line fighter type, but still want to be a fighter, there are a couple of small fixes. Crossbows. Loaded and ready, they go before initiative in some D&D. Rate of fire is terrible, and variable weapon damage makes them worse, but you're only taking the one shot at the beginning of combat. Drop it and switch to a melee weapon (perhaps handed to you by your trusted henchman or hireling), but one with reach; a spear or a polearm, and fight from the second rank. No penalties, still in the fight. Remember the bow's rate of fire was a trap to lure you in.

The caveat here is that D&D grew to include stuff from out of it's original vision, stuff from the later medieval period, the renaissance and reformation periods, and even the early modern world; and from diverse cultures from around the world and a hefty dose of the purely fantastic, so it became possible to make a viable archer type character for D&D (much more easily than you could a swashbuckler type) and when you do, depending on the rules set an interpretations, they will then completely dominate the field.

Once weapon specialization becomes an option, and specialized arrow types, the archer gets deadly. Most dungeon combats take place at close range, but to a bow specialist they are usually at point blank range within 30' they are +2 to hit and +2 to damage, and roll double damage, making a specialized archer get two attacks/round at 1st level, with each attack doing 6-16 points of damage, assuming normal arrows[(1d6+2) x 2]. Given that an archer is more likely to be a higher Dexterity character, and that players tend to play advantages and forget disadvantages, he's likely to be hitting at something like +6/+6, and rolling d8s instead of d6s for damage, possibly with a Strength bonus added (bows built for Strength cost more, but are still possible at lower levels). Wait until this guy is a few levels higher, and has a bow built for Strength to match his Gauntlets of Ogre Power or Girdle of Giant Strength, and he's getting 3 attacks per round at that +6 to hit, now with a +8 to damage on each of those attacks while using Sheaf arrows, maybe magic Sheaf arrows.

Let's say this Archer is 7th level, equipped with normal sheaf arrows, Gauntlets of Ogre Power, and a Bow built for up to 18/00 Strength. When within 30' of his target he's doing up to 3x (2d8 +8 ), at 18-32 points per hit, that comes to a maximum of 96 points of damage per round. That's enough damage to potentially take down a huge, ancient red dragon by himself in a single round, at 7th level. I say potentially, because even with his probable attack bonuses of +6, he still only hits 55% of the time (-1 AC for a Red Dragon), and his average damage per hit is only 25 points, so the odds are he only does 50 points of damage in the first round, leaving a little bit for the rest of the party to do.

This will be exacerbated if we don't use the weapons vs. AC chart, the rules for firing into melee (which most groups forget in practice), or the rules for cover and/or concealment. These are all AD&D things (although similar rules may have cropped up later in the D&D line with BECMI or Cyclopedia and I just don't recall), but so is weapon specialization.

How do we fix this? Don't use Unearthed Arcana? Don't play 2nd edition AD&D? Tough to say really. I am not sure it can be fixed in AD&D, without changing the rules to disallow specialization, bows built for Strength or non-standard arrows.