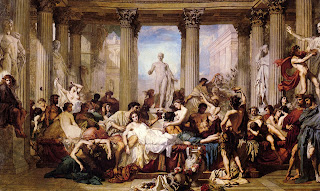 As I celebrate my return to regular blogging, the ancient Roman festival of Saturnalia and my recent election as Plebeian Tribune in Nova Roma, I also am here to announce a new themed contest. You can probably guess the theme this time around is “The Might and Glory of Rome”. Rome offers us so much to build off of from their religion and their history for an adventure contest- Legions, Gladiators, Senatorial intrigue, Conquest, Civil Wars and interaction with other ancient cultures. Not to mention distinctive periods within Roman history, me, I am a late republic/early empire kind of a guy, but a lot of people are really into Rome at her height under her best emperors Trajan, Hadrian and Marcus Aurelius.

So, I am not placing too many rules on this contest as far as content length, we've run into issues with that before; what I am looking for is a Roman themed adventure. It can be in One-Page-Dungeon format or it can be a short adventure or a giant hex-crawl; it's up to you, what you want to submit as an entry, each entry will be judged on it's own merit by my veteran panel of judges. Multiple entries are permitted, but remember- you may end up competing against yourself for the top spot! The adventure can take place in a purely historical Roman setting, or it can be a Roman themed fantasy world or something in between, like a Roman empire with magic where the Satyrs and Nymphs are real. Submitting an adventure, unless you specifically state otherwise upon submitting said adventure, is granting permission for me to publish the adventures to the web for free. All adventures should use OSR standard rule types- Labyrinth Lord, Swords & Wizardry, OSRIC, D&D or AD&D- you know, the one's that are essentially compatible and interchangeable; plus they're the games I play and it's my contest, so I make the rules.

Oh, and just to help everyone out, inspiration-wise and what-not, a few days ago this was posted at the Land of Nod; and he thought it was a useless blog post.

Prizes, thus far, are-
-for each entry one spiffy refrigerator magnet from the Great Khan's blog, probably with a highly decorated envelope, courtesy of my lovely wife Mona.
-1st, 2nd and 3rd place will each receive a pdf copy of 43 AD, the game that I helped edit and playtest. 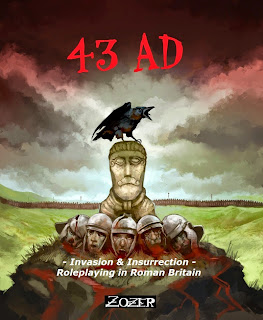 -1st place will receive an 8”x10” canvas print from easycanvasprints.com

As always I am looking to find more sponsors for the contest, and I'll try and renegotiate my sponsorship deal with Mick Leach from Eastern Front Studios; they just had a successful Kickstarter program for some Gladiator Dwarf miniatures that was partially the inspiration for this contest.

All entries should be emailed to me at williamjdowie AT gmail DOT com and should be received before midnight on the ides of January this contest is officially opened as of NOW.