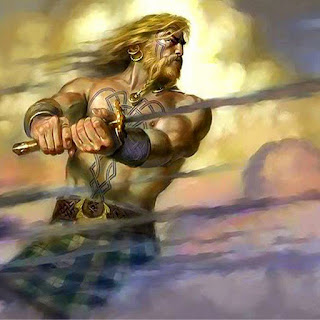 Cool Todd Lockwood art I found on the internet to set the mood.

I closed the poll this morning and “Celts” was the clear winner among the proposed themes, with roughly 50% more votes than it's closest competitor “Norse”. The people have spoken, so the fairly broad theme of Celts shall be the theme of this short adventure design contest. Given that my long running “Garnia World” campaign has a Celtic theme, these adventures could prove quite useful to me personally, and I hope that they will be equally valuable to the rest of the community.

I am still working on prizes, but I am thinking the grand prize may well be a copy of the green cover AD&D 2nd edition historical reference series “Celts Campaign Sourcebook”. I'll see what else I have here and update you all.

I am thinking I will make the submissions available, after the contest, for free on DrivethruRPG, unless those of you that submit entries specifically ask me not to. I had similar plans for earlier contests, but never got around to it, as I had not set up a publisher account there yet.

Adventures should be short, no more than 10 pages, including any maps or art. Adventures should be compatible with TSR era D&D or their retroclones.
Adventures should have a Celtic theme. I understand this covers a broad swath of history, so I should limit it to ancient or medieval, but I also think it might be pretty cool to see an adventure set in the Scottish highlands around the time of the Jacobite rebellions, maybe featuring Bonnie Prince Charlie as an NPC? So go where your muse takes you, head-hunting Celts vs. Romans in a darkly magical version of ancient Gaul, to King Arthur's knights of the round table, to the Easter Rising of 1916; and that's just historical fantasy, feel free to take us in other fantastic directions with the Sidhe or the Fomorians.