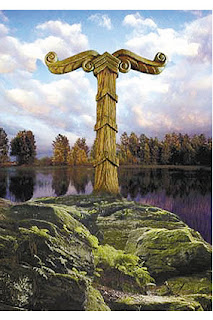 I am not going to lie, I day is going to be short. My oldest daughter had a doctors appointment today and my youngest daughter had a German Honor Society thing, so my time is limited, it's 11:31 now and I am not sure I'll get this up before midnight.

I is for Iðunn, a goddess of the Aesir, she is the keeper of the apples of youth. That's a pretty important job, since the gods would otherwise grow old and die.

I is for Irminsul, the great world pillar, sacred to the Saxons, that Charlemagne destroyed in July of 772 AD.

I is for Islam, the name of the religion founded by Muhammed, the followers of which are referred to as Muslims. Despite sharing a common root with Christianity, Norsemen seemed to get along quite a bit better with the followers of Islam than their neighbors the Christians, and they did quite a bit of trading with them. Muslim silver is often found in Viking hoards.

I is for Ifing, the river that separates the lad of the Gods from the land of the Giants. It runs swiftly and deep, ice will never form upon it, and it is difficult to ford.

That's all for today, I am skipping Iceland, as I assume everyone has heard of it, but my campaign is pre-Icelandic settlement.