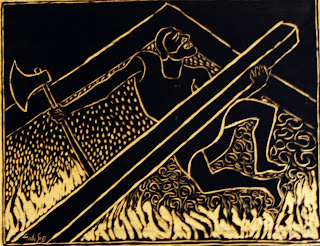 Unlike yesterday's letter C, D is a pretty good day for letters in a Norse themed A-Z April blogging blitz, so I actually am probably going to end up leaving out some really cool stuff just because I don't have the time to do it, or I overlook it.

So D is for Dwarf. We get pretty much our entire concept of what a Dwarf is in a fantasy setting from Tolkien and Tolkien ripped them straight from the Norse, with a couple of minor modifications. Tolkien's Dwarves are more warrior and less wizard, about the same as craftsmen and just as greedy for gold and gems and crafted items. He even stole the names of his Dwarves straight from Old Norse poetry. He did fail to mention their creation though, as the maggots that writhed through the flesh of the slain Jotunn Ymir.

D is also for Democracy, I know, the word is Greek in origin, but the concept is apparently universal. The Norse people, even while living in a caste based social structure, had a form of democracy that existed even during their periods of monarchy. Not in the sense that they had a limited, constitutional monarchy in the modern sense, but in that their kings were merely the first among equals and ruled only with the consent of the people. Parts of the Norse world did without kingship, or even established nobility, altogether, like Iceland. They had a form of parliamentary democracy working for them centuries before it would become standard in western Europe again.

D is also for Denmark, and I'd be remiss if I didn't mention this Scandinavian nation. Apparently most of the earliest Viking raids were launched from Denmark. Denmark was the first Scandinavian country to become truly united as a nation. They invaded and took over a huge section of England that became known as the Dane-Law. Danish vikings were known in Scotland and Ireland as dubh gall, or black (or dark) strangers, referring to their hair color, in contrast to the finn gall, or fair strangers, the Norwegians. This led to a number of Scottish clans being named after them, including my own surname, which made it via the torturous route of starting out as Mac Gille Dhuibh, and making it's way first to anglicized transliteration as MacIldowie, and, finally, to Dowie. MacDougal started out pretty much the same way, except more straight forward as Mac Dhuibh Ghaill. Gaelic is a strange and wondrous language.

D is for Disir, which are good spirits that watch over people, places or things. They are female, and may be ancestral spirits. They may also be lesser Goddesses of the Vanir. Freyja is known by the title Vanadis, or Dis of the Vanir. They were worshiped with their own holiday, Disablot, on the full moon in February. They also had the function of foretelling deaths within a family, kind of like Banshees. They would often be left offerings of food.

D is for Draupnir, the name means "Dripper", it is Odin's Gold Ring, that every ninth night creates eight rings identical in weight to itself. Obviously, since being a "Ring-Giver" is such a high compliment, and both conspicuous consumption and the free gifting of wealth to one's followers were such important virtues in Norse society, a never-ending source of wealth to give would be an awesome magic item for a king to have at his disposal. After the death of Balder, Odin places it upon his pyre, thus it becomes Balder's ring, a grave good, which he owns in Hel.

D is for Draugar, with Skyrim all the rage these days, I had to mention these undead from the Norse world. Unlike in Skyrim, they aren't just super tough zombies, or whatever. These are really kind of weird, they become extremely heavy, are either corpse-pale or death-black, malignantly intelligent and become magically powerful, with the ability to change size at will and cause disease. They can "swim" though the earth, even solid stone. They are immune to weapons, unless wielded by a hero. They can walk during the day, and create darkness during the day. They usually just hate one family, but sometimes not. Sometimes when they kill their victim rises the next day as another Draugr. They can enter the dreams of the living, like Freddy Krueger, and they can cause anyone passing over their burial mound to die. They can cause insanity. They can really mess with livestock bad, causing them to run until they die of exhaustion or just spontaneously rip the skin from them. They also drink blood. Enjoy! They aren't even the only type of Norse undead.