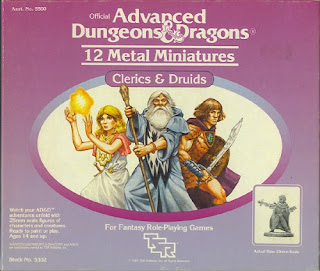 When most people think of Clerics in D&D they have an image in their mind of a guy that is part templar knight, part inquisitor and part village vicar; essentially a wholly Christian dude that kicks ass for what-ever god they choose, but is really Christ in fantasy disguise. I can see the appeal of this and have played as a fantasy Christian crusader priest myself once or twice. I think that vision of the cleric is better than the "Combat Medic" view that makes Clerics less fun to play in a heroic game. The final view of the Cleric is the undead slayer, which is pretty cool, but is essentially just a Christian priest crusading against a very specific type of religious enemy.

However, I don't necessarily default to this crusader adventuring priest mode because I grew up reading Greek and Roman mythology in my formative years and even in my early D&D playing years I was influenced by my knowledge that Julius Caesar was himself Pontifex Maximus of Rome*. When I think of a polytheistic priesthood, I usually default to the Greco-Roman pagan model.

As I got older I developed an interest in the Vikings and their culture, mythology and religious practices, and that gave me an even wider view of what Clerics in D&D could be. I got interested in the Celts too, but I'll discuss them later with the Druids.

Plus you got the pretty serious dude holding the heart in his hand in the Player's Handbook (pg. 43), of all the pagan priests shown he was the most hardcore. He did challenge my thoughts on Clerics using edged weapons though. Maybe it's just a ceremonial thing to use edged weapons to dispatch sacrificial victims?

The real problem with Clerics in D&D is that, holy wars aside, clergy don't tend to go adventuring; instead they are temple attendants or community leaders or both. A wide variety of taboos make adventuring pagan priests unlikely**. You need to create certain game-isms to make adventuring priests likely and I think that the assumed setting of D&D does that quite well with all of it's humanoid hordes rampaging about and evil cults attempting the destruction of civilization as we know it; really religious communities might even send their young men (and maybe women) out to fight evil where they can find it the same way Mormons send out missionaries.

Druids are an unusual problem for me in D&D. Gary Gygax states in the 1st edition AD&D Player's Handbook that "Druids can be visualized as medieval cousins of what the ancient Celtic sect of Druids would have become had it survived the Roman conquest. They hold trees (particularly oak and ash), the sun, and the moon as deities." which is utter nonsense, apparently taken from romantic notions about "noble-savage" Celts and their wonderful in-tune-with-nature lifestyle. So the entire Druid class is based on a false premise and has contaminated the game ever since with that balance keeping nonsense. Druids in real history were simply the priestly caste of Celtic culture. They had a wide variety of religious and temporal responsibilities, many related to law.

According to the Greeks, the Druids were scientist and philosophers. They also believed that the Druids could sing spells to raise or calm the waters, assume the form of any animal, cure ailments and prophesy***. The Romans ascribed to them the gift of remarkable intelligence, but also made them the leaders of a savage cult that practiced human sacrifice and urged war on Rome; ultimately they would exterminate the Druids that fell within their grasp****. Considering human sacrifice still occurred under exceptional circumstances in Rome*****, I have always found the anti-Druid propaganda of the Romans to be somewhat hypocritical. Additionally, gladiatorial combat was evolved from a ritual sacrificial combat during funeral rites that the Romans adopted from their Etruscan masters when Roma was young.

My point being that the Druids weren't balance worshiping nature priests historically, they were thought to be wizards, prophets and healers with regards to their mystical powers. Sacred groves were their "temples" in some accounts. Mistletoe was considered to be a spell component, a plant with magical properties, not some kind of holy symbol. If you had to pick a medieval evolution for the Druid then Merlin would be a better example than the AD&D Druid; or you could look at medieval Hinduism, since Hinduism is the closest related surviving member of the "ancient Indo-European religion" tree. That might make for an interesting class actually considering the early medieval period produced the Kama Sutra******.

*An unofficial title of the Pope today, according to Wikipedia.

**Obviously not impossible though, considering just the example of Gaius Julius Caesar who was "adventuring" through Gaul and into Germania and Britannia; he just happened to bring a literal army of Henchmen and Hirelings. He became enormously wealthy as a result and achieved extraordinary temporal power, albeit briefly.

***Clearly these abilities largely made it into D&D.

****The Druidic caste in Ireland was destroyed by the rise of Christianity, largely due to the proselytizing of St. Patrick; in Scotland it is said to be St. Columba that took them out.

*****Vestal virgins that violated their vow of chastity were buried alive. It is believed that some prisoners were ritually drowned during the second Punic war. Roman legionaries were decimated for cowardice not only as a disciplinary measure, but also to make things right with the gods of the legion.

******That last bit is actually a joke, I am pretty sure I wouldn't want to play in a game where the party Druid used the Kama Sutra as a sacred text. Not only do I run a pretty PG-13 campaign, I also play with my kids.