World Building, D&D and Me 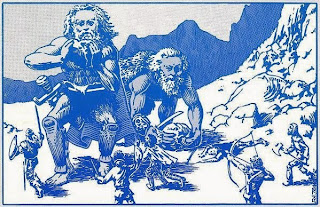 I guess this is really what my last post was all about. So, rather than reply to all the comments on that post I decided to write this post.

What got me thinking about the whole thing was the fact that I am knee deep in a new world building project right now; my working title is "Yassa- Legacy of the Khans". It's more or less based on the idea that, in a world much like our own, there arose a Genghis Khan type figure that united his people and that he and his descendants conquered the entire known world in their 13th century. The campaign is set in the dawn of their 15th century as the empire has fragmented into rival khanates and their subject peoples are starting to rebel and reassert themselves. Many of the local Khans have "gone native" and adopted the culture and religions of their subjects, causing tensions, and outright wars, between the various parts of the once unified empire. I am not as far along on this project as I'd like to be at this point, but these things happen; it's a pretty ambitious project.

I also am reminded of the various other world building projects I have done.

I had a Greco-Roman themed world where all of the Dwarves were male, born to Human families and considered to be the sons of the God Vulcan. There were no other Demi-Human races. All of the Humans and Dwarves were native to a single large island archipelago and they had just developed the maritime technology to begin their age of exploration. The rest of the world was populated by bestial Humanoids that were the descendants of mankind that had been cursed by the gods for lapsing into Evil ways, Pig-Faced Orcs, Dog-Faced Kobolds, Jackal-Headed Gnolls, etc.

This one lasted one session, and I didn't even get to DM it. Darryl and I were co-DMing this as a project, he DMed the first session. Everyone had a good time. A person who showed up late and didn't play spent 4 hours explaining why this setting was lame and "regular" D&D would be better, but if he had to play here, he'd be OK with playing a Half-Ogre.

One semester of college I developed an Anglo-Saxon themed world where humanity clung to a fringe of coastline west of a huge forest, beyond which was a vast steppe land dominated by a Sauron type dark lord and his Humanoid minions. The Elves, the only Demi-Human race that had appeared in the campaign before the end, had fled across the western sea and only a small band returned on a quest for a magic sword buried in a mound.

Mona and I played this one as a solo campaign for most of the semester and petered out around finals. I resurrected the setting a couple of years later for a larger group, but it didn't last more than a few sessions. Nobody was really thrilled with having Anglo-Saxon names, they wanted a more "regular" D&D game.

Then there is the grand-daddy of all of my world building projects: Garnia. 30+ years in the making, it's finally getting a serious reworking for eventual public consumption. That's 30+ years of notes and revisions and retcons and stuff that's only stuck in my head. I have a whole other blog devoted to it. Garnia is (mostly, at it's core) a Celtic world where Gauls and Britons were literally brought to a different world via magical means. Once they got there, they conquered an Elven empire and then had to take over their mantle of defending pretty much everything from the marauding armies of Humanoids. They aren't the only ones that made the trip, and other creatures made the trip from other worlds too. Garnia is the closest to a "standard" D&D world as I have ever created, which makes sense, I started it when I was a kid and wanted to include all the stuff from my brand new AD&D Monster Manual.

Garnia has actually absorbed two other entire world building projects that were based on a similar theme, one with Romans and one with Vikings. I just placed them on different, far away, parts of the world.

Garnia has been my default campaign world for over 30 years, some campaigns have flourished there, some have died after one session; it's tough to say why. I've run every edition of D&D, except 4th, and Hackmaster there, plus a Homebrew system and we're working on another homebrew system now. Hell, I've even run GURPS there. Once.

I guess the world building is important to me because it lets me understand more fully how the NPCs are going to react to any given situation. A cultural/political/religious/whatever context is important to me as a DM for figuring out the motives and justifications for actions that these NPCs or Monsters are going to use. I guess that's worth more to me to get into character than it is for the minor difficulties of players having trouble pronouncing exotic names or being expected to read a couple of emails or a cultural background sheet before we start.

The comments on my last post were largely supportive of my deep world building for every campaign I run, except for one that said I was trying to tell my story instead of letting the players tell theirs. I guess that might be true to a certain extent, D&D is interactive group story telling to each other, but the DM is responsible for the setting, the plot and all of the non-main characters. You can't really play the game without the DM's input, because there would be no story to tell.

Just out of curiosity, which of these worlds sounds the most compelling to you from the brief synopsis?